After Alice: A Novel (Paperback) 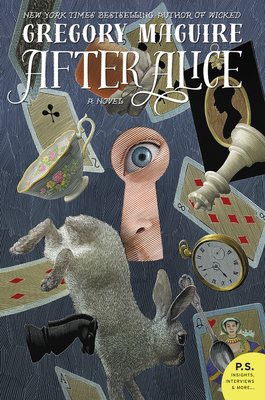 After Alice: A Novel (Paperback)

“Maguire, the fairy tale spin doctor, here takes on Wonderland. The heroine is not Alice, but rather her playmate Ada, a sheltered and lonely girl with a twisted spine. Ada inadvertently follows Alice into Wonderland, and her perceptions and experiences are marvelous and fresh, with her dry wit, pragmatism, and imagination enlivening and dominating the scene. Back at home, Alice's sister Lydia offers readers a glimpse into Victorian times as Maguire's prose gives a mystical glow to landscapes, personalities, and everyday life.”
— Coleen Colwell (W), Booksmart, Morgan Hill, CA

From the multi-million-copy bestselling author of Wicked comes a magical new twist on Alice’s Adventures in Wonderland, published to coincide with the 150th anniversary of Lewis’s Carroll’s beloved classic.

When Alice toppled down the rabbit-hole 150 years ago, she found a Wonderland as rife with inconsistent rules and abrasive egos as the world she left behind. But what of that world? How did 1860s Oxford react to Alice’s disappearance?

In this brilliant work of fiction, Gregory Maguire turns his dazzling imagination to the question of underworlds, undergrounds, underpinnings—and understandings old and new, offering an inventive spin on Carroll’s enduring tale. Ada, a friend of Alice’s mentioned briefly in Alice’s Adventures in Wonderland, is off to visit her friend, but arrives a moment too late—and tumbles down the rabbit-hole herself.

Ada brings to Wonderland her own imperfect apprehension of cause and effect as she embarks on an odyssey to find Alice and see her safely home from this surreal world below the world. If Eurydice can ever be returned to the arms of Orpheus, or Lazarus can be raised from the tomb, perhaps Alice can be returned to life. Either way, everything that happens next is “After Alice.”

Gregory Maguire is the New York Times bestselling author of A Wild Winter Swan; Hiddensee; After Alice; Confessions of an Ugly Stepsister; Lost; Mirror Mirror; and the Wicked Years, a series that includes Wicked—the beloved classic that is the basis for the blockbuster Tony Award–winning Broadway musical of the same name—Son of a Witch, A Lion Among Men, and Out of Oz. He lives with his family in New England.

“Thoughtful and disconcertingly memorable…Ada, Alice’s best friend, also falls down a rabbit hole into a phantasmagorical realm where she too is tossed and bossed about by strange creatures who delight in clever, frustrating wordplay…A feast for the mind…readers will ruminate on it long after turning the last page.” — Publishers Weekly (starred review)

“Maguire firmly sets Wonderland in time and place and weaves an intricate web of symbolism and allegory…The novel is full of the magic, wonder, and fresh twists that his fans have come to expect, and Maguire-and Wonderland-lovers alike will enjoy this fantastic return.” — Booklist (starred review)

“Continuing his tradition of rewriting fairy tales with an arch eye and offbeat point of view, Maguire turns his attention to Lewis Carroll and Alice’s Adventures in Wonderland. . . . A brilliant and nicely off-kilter reading of the children’s classic, retrofitted for grown-ups—and a lot of fun.” — Kirkus Reviews (starred review)

“[Maguire’s] playful vocabulary may be Carroll-esque, but his keen wit is closer to Monty Python, with a fine, unforced sense of play… his erudition is a joy, his sense of fun infectious.” — Joe Hill, New York Times Book Review

“In one vexing day, Ada, Lydia, and Miss Armstrong must adapt to deal with their circumstances and find new facets of themselves. Maguire fans should be pleased with his take, at turns clever and philosophical, on the Lewis Carroll classic.” — Library Journal

“The author of Wicked, the beloved retelling of the Wizard of Oz, has done it again. In honor of Alice and Wonderland’s 150th anniversary, Gregory Maguire is offering a new perspective on the classic tale… We guarantee you’ve never imagined Alice and Wonderland quite like this.” — InStyle (Book Club Selection)

“Through means of jokes, puns, and slightly scandalous ditties, combined with the elevated vocabulary that was very common in Victorian literature, Maguire evokes both the time period and Carroll himself… this book is a wonderful companion to Lewis Carroll’s classic tales.” — New York Journal of Books

“AFTER ALICE will inspire readers to think anew about both historical realities and classic fantasies.” — Bookreporter.com

“Maguire plays with the ancient archetypes at work in Wonderland while injecting them with fresh perspective.” — Entertainment Weekly

“[S]tunningly clever in its conflation of fairy tales, the mix and match of characters, woven throughout with references to philosophical ideas, the social issues of the day, and attitudes of the time…Maguire impressively channels Carroll’s penchant for humorous wordplay, literary nonsense, and logic games.” — Boston Globe

“Gregory Maguire has done it again! Just as he did with Wicked, Maguire has turned the beloved children’s tale Alice’s Adventures in Wonderland into an adult world with real problems and real rules yet still full of magnificent possibilities.” — The Arched Doorway

“This new expedition into Wonderland promises a bit of history, a touch of adventure and a dazzling amount of imagination.” — Stuart Magazine