The End of Days: Armageddon and Prophecies of the Return (Earth Chronicles #7) (Mass Market) 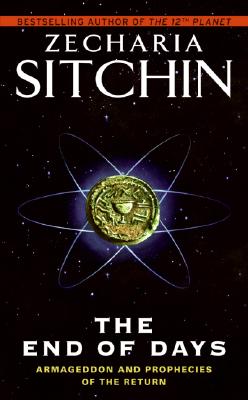 The End of Days: Armageddon and Prophecies of the Return (Earth Chronicles #7) (Mass Market)

This is book number 7 in the Earth Chronicles series.

Thirty years ago, Zecharia Stichin challenged established notions of the origins of Earth and man. In a series of provocative books, he offered a radical new theory, based on indisputable documentary evidence, of extraterrestrial beings—the Anunnaki—who arrived eons ago to plant mankind’s genetic seed. In this triumphant final volume, he closes the circle, exploring the profound question that has troubled us throughout time—from the Bible’s Daniel to Sir Isaac Newton to modern Americans—When will the end come?

In The End of Days, Sitchin solves ancient enigmas, dechipers the original meaning of religious symbols, analyzes scientific calculations, explores Messianic expectation, and bridges the links between history and prophecy—between the 21st century, A.D. and the 21st century B.C.—to present a startling vision of what is to come for us all.

“Sitchin’s fans will find this an interesting, though inconclusive read. As for the inevitably skeptical majority, they will take a certain amount of entertainment from wondering what each new chapter will bring: Sodom and Gomorrah destroyed by a nuclear bomb? Solomon’s Temple built on top of a spaceport? Muslim minarets simulating rockets ready for launch? Wow.” — Kirkus Reviews