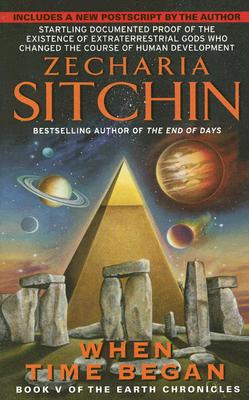 This is book number 5 in the Earth Chronicles series.

They came to Earth thousands of years ago to usher in mankind's first New Age of scientific growth and spiritual enlightenment. Under the guidance of these ancient visitors from the heavens, human civilization flourished - as revolutionary advances in art, science and thought swept through the inhabited world. And they left behind magnificent monuments -- baffling monoliths and awesome, towering structures that stand to this day as testaments to their greatness.

In this extraordinarily documented, meticulously researched work, Zecharia Sitchin draws remarkable correlations between the events that shape our civilisation in millennia past - pinpointing with astonishing accuracy the tumultuous beginning of time as we know it . . . and revealing to us the indisputable signature of extraterrestrial god indelibly written in stone.

“Sitchin has outdone himself in this attractive book…his grasp of astronomical units and ages is startling.” — Critical Review

“Reveals the signature of extraterrestrial gods written in stone.” — Voice of Astara