Hiddensee: A Tale of the Once and Future Nutcracker (Paperback) 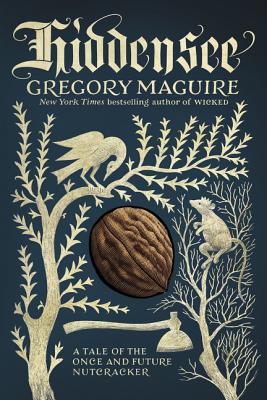 Hiddensee: A Tale of the Once and Future Nutcracker (Paperback)

“This origin story of the Nutcracker's creator blurs the lines of fantasy. In it, we are treated to the best commentary on mythology, whether Greek or Germanic. Resurrected from death at a young age, Dirk Drosselmeier returns to the living with a gift from the great god Pan. As he grows older, Dirk remains young at heart and becomes a master figurine and toy maker. Maguire's gift at fleshing out characters of beloved and classic tales is so evident in Hiddensee that it will keep you reading at all costs.”
— TJ Byrnes, Oblong Books And Music,LLC., Millerton, NY

The author of the beloved New York Times bestseller Wicked returns with an inventive novel inspired by a timeless holiday legend, intertwining the story of the famous Nutcracker with the life of the mysterious toy maker named Drosselmeier who carves him.

Hiddensee: An island of white sandy beaches, salt marshes, steep cliffs, and pine forests north of Berlin in the Baltic Sea, an island that is an enchanting bohemian retreat and home to a large artists' colony-- a wellspring of inspiration for the Romantic imagination . . .

Having brought his legions of devoted readers to Oz in Wicked and to Wonderland in After Alice, Maguire now takes us to the realms of the Brothers Grimm and E. T. A. Hoffmann-- the enchanted Black Forest of Bavaria and the salons of Munich. Hiddensee imagines the backstory of the Nutcracker, revealing how this entrancing creature came to be carved and how he guided an ailing girl named Klara through a dreamy paradise on a Christmas Eve. At the heart of Hoffmann's mysterious tale hovers Godfather Drosselmeier-- the ominous, canny, one-eyed toy maker made immortal by Petipa and Tchaikovsky's fairy tale ballet-- who presents the once and future Nutcracker to Klara, his goddaughter.

But Hiddensee is not just a retelling of a classic story. Maguire discovers in the flowering of German Romanticism ties to Hellenic mystery-cults-- a fascination with death and the afterlife-- and ponders a profound question: How can a person who is abused by life, shortchanged and challenged, nevertheless access secrets that benefit the disadvantaged and powerless? Ultimately, Hiddensee offers a message of hope. If the compromised Godfather Drosselmeier can bring an enchanted Nutcracker to a young girl in distress on a dark winter evening, perhaps everyone, however lonely or marginalized, has something precious to share.

Gregory Maguire is the New York Times bestselling author of A Wild Winter Swan; Hiddensee; After Alice; Confessions of an Ugly Stepsister; Lost; Mirror Mirror; and the Wicked Years, a series that includes Wicked—the beloved classic that is the basis for the blockbuster Tony Award–winning Broadway musical of the same name—Son of a Witch, A Lion Among Men, and Out of Oz. He lives with his family in New England.

“Maguire’s characteristic tone is dark and enchanting in his newest fairy tale revision... a powerful story of hope and redemption sure to delight his fans.” — Booklist (starred review)

“An inventive, and often dark, retelling of the holiday classic.” — BuzzFeed News

“Continuing his tradition of rewriting fairy tales with an arch eye and offbeat point of view, Maguire turns his attention to Lewis Carroll and Alice’s Adventures in Wonderland…A brilliant and nicely off-kilter reading of the children’s classic, retrofitted for grown-ups—and a lot of fun.” — Kirkus Reviews (starred review)