The Book of Living Secrets (Hardcover) 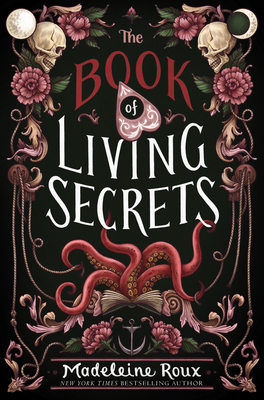 The Book of Living Secrets (Hardcover)

Perfect for fans of The Hazel Wood, this genre-bending page-turner from New York Times bestselling author Madeleine Roux follows two girls who transport themselves into the world of their favorite book only to encounter the sinister alternate reality that awaits them.

No matter how different best friends Adelle and Connie are, one thing they’ve always had in common is their love of a little-known gothic romance novel called Moira. So when the girls are tempted by a mysterious man to enter the world of the book, they hardly suspect it will work. But suddenly they are in the world of Moira, living among characters they’ve obsessed about for years.

Except…all is not how they remembered it. The world has been turned upside down: The lavish balls and star-crossed love affairs are now interlaced with unspeakable horrors. The girls realize that something dark is lurking behind their foray into fiction—and they will have to rewrite their own arcs if they hope to escape this nightmare with their lives.

Madeleine Roux is the New York Times and USA Today bestselling author of the Asylum series, which has sold over a million copies worldwide. She is also the author of the House of Furies series, and several titles for adults, including Salvaged and Reclaimed. She has made contributions to Star Wars, World of Warcraft, and Dungeons & Dragons. Madeleine lives in Seattle, Washington with her partner and beloved pups.

"Expert worldbuilding and fully ­realized, likable characters make this a refreshingly different adventure. A gentle touch of romance adds to the drama. Fans of The Hazel Wood, Inkheart, and other books about books will find much to love here." — School Library Journal

"This literary tale twists into an adventure filled with fantasy and horror that leads readers to a satisfying and very interesting end." — Booklist

"Roux’s sense of place is vivid, and Moira’s escapist romance, Lovecraftian horror elements, and the fangirl-tinged levity of the protagonists’ third-person voices create a meta tale that’s successfully imbued with an air of dread and paranoia." — Publishers Weekly