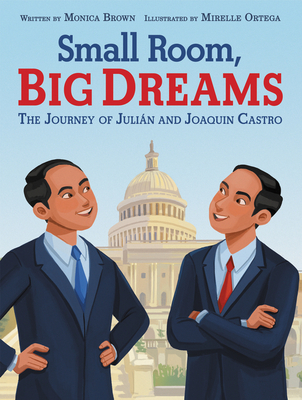 An informative, inspirational picture book biography about twins Julián and Joaquin Castro, who rose from poverty to become leaders for positive change in America.

The story of political powerhouse twins Julián and Joaquin Castro began in the small room that they shared with their grandmother Victoriana in San Antonio, Texas. Victoriana crossed the border from Mexico into Texas as a six-year-old orphan, marking the start of the family’s American journey. Her daughter Rosie, Julián and Joaquin’s mom, was an activist who helped the barrio through local government.

The strong women in their family inspired the twins to get involved in politics. Julián and Joaquin have been working at the local, state, and national level—as a former presidential candidate, mayor, and member of President Obama’s Cabinet, and a U.S. Congressman, respectively—to make the country a better place for everyone.

* A Chicago Public Library Best Book of the Year *

Monica Brown is the author of Pele, King Of Soccer/Pele, El rey del futbol and Side by Side/Lado a lado as well as the Pura Belpre Honor winners My Name is Celia/Me llamo Celia and My Name Is Gabito/Mi Llamo Gabito. Monica lives in Flagstaff, Arizona, with her husband and two daughters.

Rafael Lopez is the award-winning illustrator of My Name is Celia/Me llamo Celia and Book Fiesta! Rafael divides his time between his studios in the colonial town of San Miguel de Allende, Mexico, and a loft in downtown San Diego, where he works and lives with his wife and son.

Mirelle Ortega is an illustrator and concept artist currently living in California. She’s originally from the southeast of Mexico, and has a passion for storytelling, sci-fi, film, TV, color, and culture. Mirelle has a BFA from the Tecnológico de Monterrey (Monterrey, Mexico) in digital art and 3D animation and an MFA from Academy of Art University in San Francisco. She is fluent in Spanish and English. Visit her online at mirelleortega.com.

“A solid addition to the growing shelf of political picture-book biographies.” — Booklist

“Invigorating. A brilliant example of how family ties can lead to great accomplishments as one embraces their cultural heritage.” — School Library Journal