Into the Bermuda Triangle: Pursuing the Truth Behind the World's Greatest Mystery (Paperback) 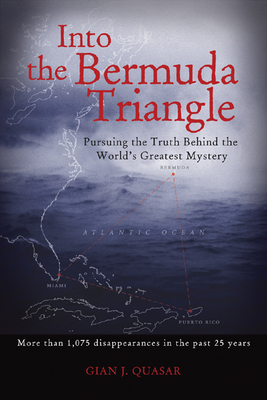 Into the Bermuda Triangle: Pursuing the Truth Behind the World's Greatest Mystery (Paperback)

A pilot reports a strange haze enveloping his plane, then disappears; eleven hours after fuel starvation, as if calling from a void, he is heard 600 miles away. He requests permission to land, then vanishes forever. A freighter steaming over placid seas disappears without a trace. A pleasure yacht ghosts past without a soul on board. A pilot calls for help because a "weird object" is harassing his plane. A jet collides with an "unknown" and is never found. . . .

Into the Bermuda Triangle is the first comprehensive examination of these baffling disappearances in more than a generation. Drawing on official reports from the NTSB and other investigative agencies as well as interviews with scientists, theorists, and survivors, leading authority Gian Quasar not only sets the record straight on previously examined cases, he also offers a bulging file of new cases, the collective results of his twelve-year investigation. In meticulous detail this unflinching account:

In this age of technological and scientific discovery, there are still mysteries that transcend understanding. The Bermuda Triangle is one.

"The best book I've ever read on this important subject."--Andrew Griffin, The Town Talk

Gian Quasar has spent 12 years researching the disappearances in the Bermuda Triangle. He and his research have been featured in History, Learning, Discovery, and Travel channel documentaries.