Journey To Portugal: In Pursuit of Portugal's History and Culture (Paperback) 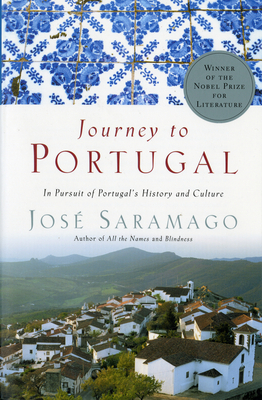 Journey To Portugal: In Pursuit of Portugal's History and Culture (Paperback)

By José Saramago
List Price: $18.99
Our Price: $17.09
(Save: $1.90 10%)
Often on our shelves, but if we're out, we can usually restock quickly
The Nobel Prize–winning author explores his homeland in “this monumental work, a literary hybrid” of cultural history, literary nonfiction, and travelogue (Publishers Weekly).

When José Saramago decided to write a book about Portugal, his only desire was that it be unlike all other books on the subject, and in this he has certainly succeeded. Recording the events and observations of a journey across the length and breadth of the country he loves dearly, Saramago brings Portugal to life as only a writer of his brilliance can.

Forfeiting the usual sources such as tourist guides and road maps, he scours the country with the eyes and ears of an observer fascinated by the ancient myths and history of his people. Whether it be an inaccessible medieval fortress set on a cliff, a wayside chapel thick with cobwebs, or a grand mansion in the city, the extraordinary places of this land come alive.

Always meticulously attentive to those elements of ancient Portugal that persist today, he examines the country in its current period of rapid transition and growth. Journey to Portugal is an ode to a country and its rich traditions.

JOSÉ SARAMAGO (1922–2010) was the author of many novels, among them Blindness, All the Names, Baltasar and Blimunda, and The Year of the Death of Ricardo Reis. In 1998 he was awarded the Nobel Prize for Literature.

PRAISE FOR JOURNEY TO PORTUGAL

"The personality that makes the book worth your while is that of Saramago,
the unmistakable voice that hovers over his fictional world and now, over the real world of his native Portugal."--The Seattle Times/Post Intelligencer
"In observances both wry and soulful, Saramago makes this travelogue a
page-turner."--Travel & Leisure
—