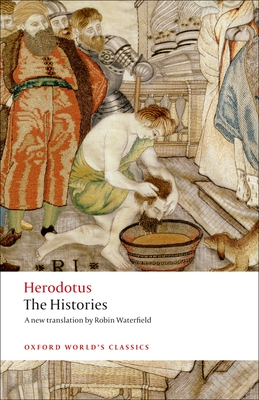 By Herodotus, Robin Waterfield (Translator), Carolyn Dewald (Editor)
List Price: $10.95
Our Price: $9.86
(Save: $1.10 10%)
Often on our shelves, but if we're out, we can usually restock quickly
The father of history, as Cicero called him, and a writer possessed of remarkable narrative gifts, enormous scope, and considerable charm, Herodotus has always been beloved by readers well-versed in the classics. Compelled by his desire to prevent the traces of human events from being
erased by time, Herotodus recounts the incidents preceding and following the Persian Wars. He gives us much more than military history, though, providing the fullest portrait of the classical world of the 5th and 6th centuries. Translated by Robin Waterfield, a distinguished translator whose version of Plato's Republic has been described as the best available', this readable new translation is supplemented with expansive notes to help the reader appreciate the book in depth. About the Series: For over 100 years Oxford World's Classics has made available the broadest spectrum of literature from around the globe. Each affordable volume reflects Oxford's commitment to scholarship, providing the most accurate text plus a wealth of other valuable features, including expert
introductions by leading authorities, voluminous notes to clarify the text, up-to-date bibliographies for further study, and much more.

Carolyn Dewald is Associate Professor of Classics at the University of Southern California. Robin Waterfield is a distinguished translator whose version of Plato's Republic has been described as `the best available'.