Born in Cambridge: 400 Years of Ideas and Innovators (Hardcover) 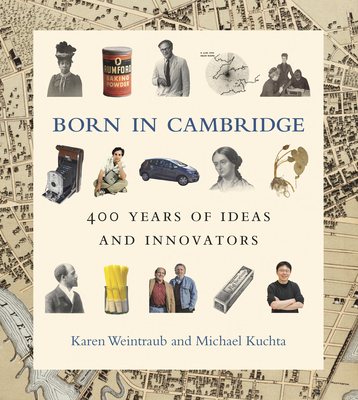 Born in Cambridge: 400 Years of Ideas and Innovators (Hardcover)

By Karen Weintraub, Michael Kuchta
List Price: $39.95
Our Price: $35.96
(Save: $4.00 10%)
Often on our shelves, but if we're out, we can usually restock quickly
Anne Bradstreet, W.E.B. Du Bois, gene editing, and Junior Mints: cultural icons, influential ideas, and world-changing innovations from Cambridge, Massachusetts.

Cambridge, Massachusetts is a city of “firsts”: the first college in the English colonies, the first two-way long-distance call, the first legal same-sex marriage. In 1632, Anne Bradstreet, living in what is now Harvard Square, wrote one of the first published poems in British North America, and in 1959, Cambridge-based Carter’s Ink marketed the first yellow Hi-liter. W.E.B. Du Bois, Julia Child, Yo-Yo Ma, and Noam Chomsky all lived or worked in Cambridge at various points in their lives. Born in Cambridge tells these stories and many others, chronicling cultural icons, influential ideas, and world-changing innovations that all came from one city of modest size across the Charles River from Boston. Nearly 200 illustrations connect stories to Cambridge locations.

Cambridge is famous for being home to MIT and Harvard, and these institutions play a leading role in many of these stories—the development of microwave radar, the invention of napalm, and Robert Lowell’s poetry workshop, for example. But many have no academic connection, including Junior Mints, Mount Auburn Cemetery (the first garden cemetery), and the public radio show Car Talk. It’s clear that Cambridge has not only a genius for invention but also a genius for reinvention, and authors Karen Weintraub and Michael Kuchta consider larger lessons from Cambridge’s success stories—about urbanism, the roots of innovation, and nurturing the next generation of good ideas.

Karen Weintraub is a journalist, now working as health reporter at USA Today. Her work has appeared in the New York Times, the Washington Post, Scientific American, and STAT, and she is the coauthor of The Autism Revolution and Fast Minds. Michael Kuchta is an architect and campus planner.
"Authors Karen Weintraub and Michael Kuchta have lived in Cambridge for over 20 years, and on long walks around the city, started noting historical plaques and tallying 'firsts' for the city. The result of their perambulations is the delightful Born in Cambridge: 400 Years of Ideas and Innovations... the book is a celebration of the People’s Republic, and the energy, innovation, and creative crackle that’s wildly out of proportion with its small size... Weintraub and Kuchta deliver an enormous amount of information, digestibly told, giving insights and new corners of discovery for even the lifelong Cantabrigian. It’s an unconventional history for an unconventional city."
—The Boston Globe

"Born in Cambridge covers a ton of ground, but part of the book's charm is turning its pages and not knowing what gem of a piece of local history you'll stumble upon next."
—The Cambridge Chronicle