The Secret War Against the Jews: How Western Espionage Betrayed The Jewish People (Paperback) 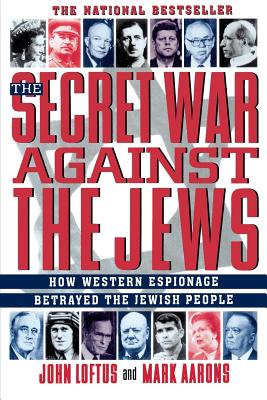 The Secret War Against the Jews: How Western Espionage Betrayed The Jewish People (Paperback)

A hugely controversial work that exposes a series of scandals from Oliver North to the British royal family, The Secret War Against the Jews reveals as much about political corruption inside Western intelligence as it does about Israel. Using thousands of previously top-secret documents and interviews with hundreds of current and former spies, Loftus and Aarons, both veteran investigators, Nazi-hunters, and authors, present a compelling narrative.

The authors demonstrate that numerous Western countries, especially the United States and Great Britain, have conducted repeated and willful spying missions on Palestine and later Israel over many decades. While on the surface these two countries and others profess to be ardent allies of Israel, they work, in fact, through their intelligence services to betray Israel's secrets to the Arabs. Their motive: oil and multinational profits, which must be attained at any price through international covert policies.

The pageant of characters appearing in this narrative is vast and shocking. This is not only a compelling work of history, but also a volume whose grave allegations will be debated for years to come.

Attorney John Loftus is the author of several histories of intelligence operations. As former prosecutor with the U.S. Justice Department's Nazi-hunting unit, he had unprecedented access to top-secret CIA and NATO archives. He lives in Florida. Mark Aarons and John Loftus are the co-authors of The Secret War Against the Jews and Unholy Trinity.

Mark Aarons is an international award-winning investigative reporter and the author of several books on intelligence-related issues. He exposed Nazi war criminals in Australia, where he lives, and prompted changes to Australian federal law.

“Europe, abetted by the United States and other nations, continues the ancient war against Jews in ways which are vividly narrated in this extraordinary book. This is the sort of story which must be brought into open view if ever we are to be wise enough to end the reflex hostility between Gentile, Arab, and Jew.” —Thomas Keneally, author of Schindler's List

“The Secret War Against the Jews...reads like a great spy novel.” —Sandee Brawarsky, Jewish Week