Midnight Rising: John Brown and the Raid That Sparked the Civil War (Paperback) 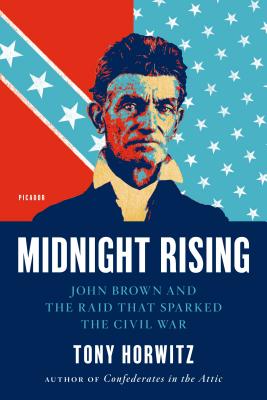 Midnight Rising: John Brown and the Raid That Sparked the Civil War (Paperback)

“The Civil War had its origins long before Fort Sumter, but possibly the biggest spark was provided by one extremely intense, driven man, John Brown. Brown's raid on Harpers Ferry in 1859 not only provided a frightening specter to nervous Southern slave owners, it was also a moral slap in the face to the rest of the country, especially during his trial. The long-range effects of one man and his moral passion are superbly rendered by the award-winning Horwitz.”
— Bill Cusumano, Nicola's Books, Ann Arbor, MI

“The Civil War had its origins long before Fort Sumter, but possibly the biggest spark was provided by one extremely intense, driven man, John Brown. Brown's raid on Harpers Ferry in 1859 not only provided a frightening specter to nervous southern slave owners, it was also a moral slap in the face to the rest of the country, especially during his trial. The long-range effects of one man and his moral passion are superbly rendered by the award-winning Horwitz.”
— Bill Cusumano, Nicola's Books, Ann Arbor, MI

Plotted in secret, launched in the dark, John Brown's raid on Harpers Ferry was a pivotal moment in U.S. history. But few Americans know the true story of the men and women who launched a desperate strike at the slaveholding South. Now, Midnight Rising portrays Brown's uprising in vivid color, revealing a country on the brink of explosive conflict.

Brown, the descendant of New England Puritans, saw slavery as a sin against America's founding principles. Unlike most abolitionists, he was willing to take up arms, and in 1859 he prepared for battle at a hideout in Maryland, joined by his teenage daughter, three of his sons, and a guerrilla band that included former slaves and a dashing spy. On October 17, the raiders seized Harpers Ferry, stunning the nation and prompting a counterattack led by Robert E. Lee. After Brown's capture, his defiant eloquence galvanized the North and appalled the South, which considered Brown a terrorist. The raid also helped elect Abraham Lincoln, who later began to fulfill Brown's dream with the Emancipation Proclamation, a measure he called "a John Brown raid, on a gigantic scale."

Tony Horwitz's riveting book travels antebellum America to deliver both a taut historical drama and a telling portrait of a nation divided—a time that still resonates in ours.

Tony Horwitz is a native of Washington, D.C., and a graduate of Brown University and Columbia University's Graduate School of Journalism. He worked for many years as a reporter, first in Indiana and then during a decade overseas in Australia, Europe, Africa, and the Middle East, mostly covering wars and conflicts as a foreign correspondent for The Wall Street Journal. After returning to the States, he won the Pulitzer Prize for national reporting and worked as a staff writer for The New Yorker before becoming a full-time author.

Horwitz has been a fellow at the Radcliffe Institute for Advanced Study at Harvard University and a visiting scholar at the John Carter Brown Library at Brown University. He lives with his wife, Geraldine Brooks, and their son, Nathaniel, on the island of Martha's Vineyard in Massachusetts.

“A hard-driving narrative of one of America's most troubling figures… Horwitz describes the disaster in riveting terms… It's impossible to read this fine book without thinking about modern-day Browns.” —Kevin Boyle, The New York Times Book Review (a New York Times Notable Book, 2011)

“Horwitz's skills are a good match for this enormously compelling character, and his well-paced narrative incorporates masterful sketches of Brown's family, foot soldiers, financial backers, admirers and prosecutors… The result is both page-turning and heartbreaking--a book to engage mind and soul.” —The Boston Globe

“Horwitz, an exceptionally skilled and accomplished journalist, here turns his hand to pure history with admirable results. Midnight Rising is smoothly written, thoroughly researched, places Brown within the context of his time and place, and treats him sensitively but scarcely adoringly.” —The Washington Post(Best of 2011, Notable Work of Nonfiction)

“Midnight Rising is a richly detailed and engaging history… Horwitz's moment-by-moment account of the doomed raid unfolds with such immediacy that he reintroduces suspense to a story we all know from textbooks.” —The San Francisco Chronicle

“Horwitz describes guerrilla action and the run-up to war with a deadline writer's immediacy… A brilliant researcher, he integrates diverse sources into a cogent adventure.” —The Washington Times

“What do you call John Brown? Is he a terrorist or a freedom fighter? ... Tony Horwitz settles upon the word insurgent -- and the label seems just right, as does Horwitz's book as a whole…” —Seattle Times

“In captivating detail, Horwitz animates the wild-eyed, long-bearded crusader . . . Make no mistake, the infamous October 1859 raid on the federal armory at Harpers Ferry by John Brown and his 18 men was the stone that began the avalanche that became the Civil Wars.” —The Cleveland Plain Dealer

“A brave and highly successful attempt to revive the legend of Brown's martyrdom for the 21st century reader…. Horwitz's vivid writing style… makes for a superb historical narrative.” —Buffalo News

“A beautifully crafted, richly detailed, and riveting narrative of a pivotal episode in American history . . . Midnight Rising is at its best reconstructing the lives (and deaths) of the relatively anonymous conspirators – especially the African-Americans.” —The Florida Courier

“Horwitz's potent prose delivers the facts of this bellwether incident in riveting fashion… It is an absorbing portrait of the often frustrated but passionately driven firebrand who successfully convinced a country of the shame of slavery and, to the South's great regret, earned martyr status in the aftermath of his execution. Brown qualifies as America's first important post-revolution terrorist…" —Bookpage

“Horwitz's description of the little band of idealists and adventurers who signed on for Brown's offensive – including five black men and two of Brown's own sons – is both fascinating and touching. His careful recreation of the bloody events of October 16, 1859, the day of Brown's disastrous raid on Harpers Ferry, is both suspenseful and heartwrenching.” —Christian Science Monitor (one of the 15 Best Nonfiction Books of 2011)

“In Midnight Rising, [Horwitz] not only gives us an action-packed adventure story, but also provides detailed historical background and vivid character portraits of the principals involved… Assiduously researched using archival sources, Horwitz's riveting tale is on sound factual footing. And he does a wonderful job of bringing to life the fascinating, messianic leader who, on the way to the gallows, would incite a nation toward civil war.” —St. Petersburg Times

“The lively narrative focuses on the 1859 attack on an armory in Harpers Ferry, W.Va, by Brown and his ragtag followers -- the event credited with lighting the fuse on the deadliest conflict in U.S. history.” —San Jose Mercury News

“A groundbreaking study of the Harper's Ferry raid that makes a number of fascinating points: Brown was not a madman or a fanatic, he knew his death would serve as a moral lightning rod, and the fallout from his actions has echoed for generations.” —Oregonian

“Superb and amply researched… [Horwitz] renders with empathy and insight the lives of the individuals Brown touched, whether they were family members, victims, or the idealistic raiders who followed him to Harpers Ferry… Brown's raiders thus appear more human, poignant, and fallible and the whole venture more noble, futile, benighted, heroic, and sadder than heretofore.” —American Scholar

“Gripping, disturbing and heartbreaking... Horwitz brings all his gifts of character building and storytelling to Brown's rise and self-promotion… Horwitz's Brown did not die in vain. By recalling the drama that fired the imagination and fears of Brown's time, Midnight Rising calls readers to account for complacency about social injustices today.” —Library Journal (a Top Ten Book of the Year, 2011)

“Lucid and compelling… The author's archival sleuthing pays off with a rich narrative.” —Kirkus Reviews

“[Horwitz's] vivid biographical portrait of Brown gives us an American original: a failed businessman and harsh Calvinist with a soft spot for the oppressed and a murderous animus against oppressors… Brown's raiders--a motley crew of his sons and various idealists, adventurers, freedmen, and fugitive slaves--come alive as a romantic, appealing bunch; their agonizing deaths give Horwitz's excellent narrative of the raid and shootout a deep pathos.” —Publishers Weekly

“There's a brilliance to this book that put me in mind of Truman Capote's In Cold Blood, only Horwitz's Midnight Rising is set deeper in America's dark past. With stunning, vivid detail, he has captured the sheer drama and tragedy of John Brown and that bloody raid at Harpers Ferry that helped propel America toward civil war.” —Erik Larson, author of The Devil in the White City and In the Garden of Beasts

“Tony Horwitz's gifts as a vivid narrator of dramatic events are on full display in this story of John Brown's wars in Kansas and his climactic Harpers Ferry raid in 1859. Brown's family and the men who joined him in these fights against slavery receive a more fully rounded treatment than in any other account. Of special note is the discussion of Brown's self-conscious emulation of Samson by pulling down the temple of bondage and dying a martyr in its ruins.” —James M. McPherson, author of Battle Cry of Freedom

“With his customary blend of rich archival research, on-location color, and lyrical prose, Tony Horwitz has delivered a John Brown book for our time. Part biography, part historical narrative, Midnight Rising is a riveting re-creation of the Harpers Ferry raid, told with an unblinking sense of Brown's tragic place in American history. Writing with enveloping detail and a storyteller's verve, Horwitz shows why Brown was--and still is--so troubling and important to our culture.” —David W. Blight, author of American Oracle: The Civil War in the Civil Rights Era

“Tony Horwitz knows how to tell a story, and here his considerable gifts as a writer bring John Brown's raid on Harpers Ferry alive in a style that is just as electric as its subject.” —Joseph J. Ellis, author of Founding Brothers and First Family

“Beautifully written and sparkling with fresh insights, Midnight Rising resurrects the multiple faces of John Brown: avenging angel or murderous terrorist; slavery's nemesis or deluded fanatic; abolitionist hero or subversive insurrectionist. In this thrilling, magnificent and essential book, Tony Horwitz shows how one man and a single event set the nation on a doomed course where the crimes of a guilty land could only be purged by blood.” —James L. Swanson, author of Manhunt and Bloody Crimes