Operation Thunderbolt: Flight 139 and the Raid on Entebbe Airport, the Most Audacious Hostage Rescue Mission in History (Paperback) 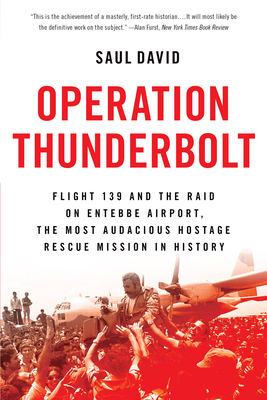 Operation Thunderbolt: Flight 139 and the Raid on Entebbe Airport, the Most Audacious Hostage Rescue Mission in History (Paperback)


Often on our shelves, but if we're out, we can usually restock quickly
The definitive account of one of the greatest Special Forces missions ever, the Raid of Entebbe, by acclaimed military historian Saul David.

On June 27, 1976, an Air France flight from Tel Aviv to Paris was hijacked by a group of Arab and German terrorists who demanded the release of 53 terrorists. The plane was forced to divert to Entebbe, in Uganda -- ruled by the murderous despot Idi Amin, who had no interest in intervening.

Days later, Israeli commandos disguised as Ugandan soldiers assaulted the airport terminal, killed all the terrorists, and rescued all the hostages but three who were killed in the crossfire. The assault force suffered just one fatality: its commander, Yoni Netanyahu (brother of Israel's Prime Minister.) Three of the country's greatest leaders -- Ehud Barak, Shimon Peres and Yitzhak Rabin -- planned and pulled off one of the most astonishing military operations in history.
Saul David is a military historian and broadcaster. He is the author of The Indian Mutiny, which was shortlisted for the Duke of Westminster's Medal for Military Literature, Military Blunders, Zulu: the Heroism and Tragedy of the Zulu War of 1879 (a Waterstone's Military History Book of the Year), Victoria's Wars, and Operation Thunderbolt: Flight 139 and the Raid on Entebbe Airport, the Most Audacious Hostage Rescue Mission in History, an Amazon History Book of the Year. He lives outside of Bath, England, where he is a professor of military history at the University of Buckingham.
USA Today "New and Noteworthy"
Vanity Fair "Hot Type" pick
"Book of the Year": The Spectator Magazine, BBC History Magazine, The Mail on Sunday
"Best History Books of 2015": Amazon UK


"What will most likely be the definitive work on the subject.... This is the achievement of a masterly, first-rate historian."
—Alan Furst, New York Times Book Review

"David paces the narrative effectively, cutting back and forth among Entebbe, Tel Aviv, and Israeli military establishments with occasional looks at events in other world capitals. With high tension and as many plot twists as any fictional thriller, this book is hard to put down."—Kirkus (starred review)

This gripping tale has already been told in numerous books, feature films and documentaries...But David's version, which cuts back and forth between the key players and reads like a film script, should prove definitive."
—The Boston Globe

"An excellent account of the planning and execution of a successful high-risk operation."—Publisher's Weekly

"David, author of numerous military histories such as Churchill's Sacrifice of the Highland Division, provides a minute-by-minute account of the entire event, focusing on the political maneuvering and the purely military operation, in excruciating detail... A definitive history of the Entebbe operation, likely to be popular among readers of military and terrorism works."—Library Journal

"Saul David has nimbly woven a breathless romp across Europe, the Middle East and Africa...a suspenseful read. 3.5 stars out of 4."
—USA Today

"Thrilling....Dozens of books and movies have tried to capture the menace and the romance of the operation....In Operation Thunderbolt, British historian Saul David relies on extensive interviews with the captors, kidnapped and rescuers to retell the story in a tick-tock trek from Tel Aviv bunkers to the airport in Entebbe. The effect is heart-racing."
—Jordan Handler Hirsch, Wall Street Journal

"He brings thrilling detail to one of the most dramatic rescue missions in recent history--and highlights the key roles played by Israeli leaders Ehud Barak, Shimon Peres and Yitzhak Rabin."
—Jane Ciabattari, BBC.com

"[The story] has been told many times on page and screen. But never better than British historian Saul David does in this meticulously researched, vivid account. He has a knack for making the reader feel he is right there."
—Martin Rubin, Washington Times

"In 1976, Palestinian Arabs from a splinter group of the Popular Front for the Liberation of Palestine (PFLP) and German far leftists from the Revolutionare Zellen hijacked an Air France Airbus with nearly 250 passengers on a flight from Athens to Paris... At the time this remarkable ation enthralled people the world over and the military historian, Saul David, now tells the story once more in a well-researched and highly readable account."
—Times Literary Supplement