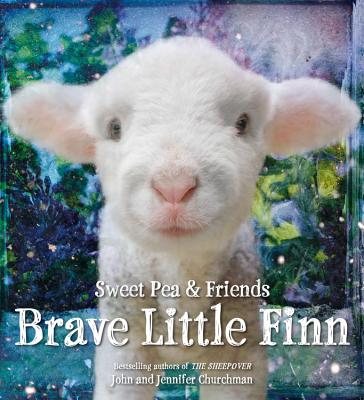 This is book number 2 in the Sweet Pea & Friends series.

Meet the adorable and resilient baby lamb Finn in this true story about friendship and courage -- a follow-up to the bestselling picture book phenomenon The SheepOver!

Newborn lamb Finn, raised inside the farmhouse, isn't as big and strong as the other animals on the farm. He can't help but be frightened as he ventures outside and encounters unfamiliar sights, sounds, and creatures. With the help of Farmer John and his animal friends, Little Finn learns to be brave and mighty.

John and Jennifer combine their talents to give voice to the stories of all the animals who surround them and add boundless enjoyment to their lives. They have made their home on a small farm in the beautiful countryside of Essex, Vermont, with their daughter Gabrielle. They are also the authors of Brave Little Finn, A Farm for Maisie,and the New York Times bestseller The SheepOver.
"John Churchman's photo-collages bring the seasons to life through textured layers of frost, raindrops, and leaves. Children who share Finn's timid tendencies should be encouraged by the strides he makes during his first year."—Publishers Weekly

"The Churchmans capture something that feels like a modern-day fairy tale."—Publishers Weekly

"I'd never met John, or heard of his farm, but when he brought in this book for us to consider selling, it was hard not to jump over the counter and pump his hand in congratulations.... This is a book that sells itself the minute you put it into a customer's hands."—Elizabeth Bluemle, Publishers Weekly Shelftalker blog