Serve to Win: The 14-Day Gluten-Free Plan for Physical and Mental Excellence (Hardcover) 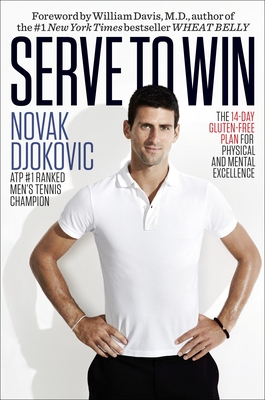 Serve to Win: The 14-Day Gluten-Free Plan for Physical and Mental Excellence (Hardcover)


Unfortunately, this book is not available to order through us. Please try Powells.com or Biblio.com.
Novak Djokovic reveals the gluten-free diet and fitness plan that transformed his health and pushed him to the pinnacle.

In 2011, Novak Djokovic had what sportswriters called the greatest single season ever by a professional tennis player: He won ten titles, three Grand Slams, and forty-three consecutive matches. Remarkably, less than two years earlier, this champion could barely complete a tournament. How did a player once plagued by aches, breathing difficulties, and injuries on the court suddenly become the #1 ranked tennis player in the world? The answer is astonishing: He changed what he ate.

In Serve to Win, Djokovic recounts how he survived the bombing of Belgrade, Serbia, rising from a war-torn childhood to the top tier of his sport. While Djokovic loved and craved bread and pasta, and especially the pizza at his family’s restaurant, his body simply couldn’t process wheat. Eliminating gluten—the protein found in wheat—made him feel instantly better, lighter, clearer, and quicker. As he continued to research and refine his diet, his health issues disappeared, extra pounds dropped away, and his improved physical health and mental focus allowed him to achieve his two childhood dreams: to win Wimbledon, and to become the #1 ranked tennis player in the world.

Now Djokovic has created a blueprint for remaking your body and your life in just fourteen days. With weekly menus, mindful eating tips for optimal digestion, and delicious, easy-to-prepare recipes, you’ll be well on your way to shedding extra weight and finding your way to a better you. Djokovic also offers tips for eliminating stress and simple exercises to get you revved up and moving, the very same ones he does before each match.

You don’t need to be a superstar athlete to start living and feeling better. With Serve to Win, a trimmer, stronger, healthier you is just two weeks away.
Novak Djokovic is a Serbian tennis player who is ranked World #1 by the Association of Tennis Professionals. He is widely considered to be one of the greatest tennis players of all time.
-