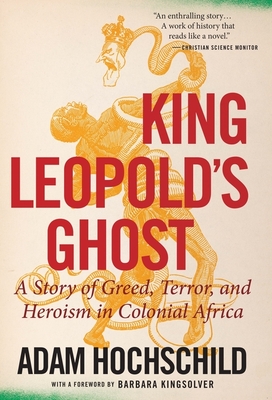 By Adam Hochschild
List Price: $17.99
Our Price: $16.19
(Save: $1.80 10%)
Often on our shelves, but if we're out, we can usually restock quickly
"An enthralling story . . . A work of history that reads like a novel." — Christian Science Monitor
“As Hochschild’s brilliant book demonstrates, the great Congo scandal prefigured our own times . . . This book must be read and reread.” — Los Angeles Times Book Review

In the late nineteenth century, as the European powers were carving up Africa, King Leopold II of Belgium carried out a brutal plundering of the territory surrounding the Congo River. Ultimately slashing the area’s population by ten million, he still managed to shrewdly cultivate his reputation as a great humanitarian. A tale far richer than any novelist could invent, King Leopold’s Ghost is the horrifying account of a megalomaniac of monstrous proportions. It is also the deeply moving portrait of those who defied Leopold: African rebel leaders who fought against hopeless odds and a brave handful of missionaries, travelers, and young idealists who went to Africa for work or adventure but unexpectedly found themselves witnesses to a holocaust and participants in the twentieth century’s first great human rights movement.

“An enthralling story, full of fascinating characters, intense drama, high adventure, deceitful manipulations, courageous truth-telling, and splendid moral fervor . . . A work of history that reads like a novel.” —Christian Science Monitor   “As Hochschild's brilliant book demonstrates, the great Congo scandal prefigured our own times . . . This book must be read and reread.” —Neal Ascherson, Los Angeles Times   “A vivid, novelistic narrative that makes the reader acutely aware of the magnitude of the horror perpetrated by King Leopold and his minions.”  —The New York Times   “King Leopold’s Ghost is a remarkable achievement, hugely satisfying on many levels. It overwhelmed me in the way Heart of Darkness did when I first read it—and for precisely the same reasons: as a revelation of the horror that had been hidden in the Congo.” —Paul Theroux   “Carefully researched and vigorously told, King Leopold’s Ghost does what good history always does—expands the memory of the human race.” —The Houston Chronicle —