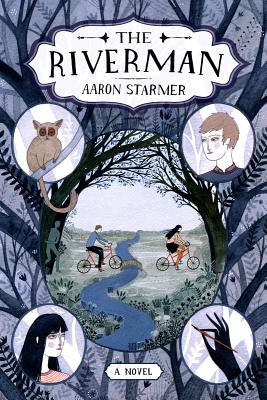 This is book number 1 in the The Riverman Trilogy series.

Alistair Cleary is the kid who everyone trusts. Fiona Loomis is not the typical girl next door. Alistair hasn't really thought of her since they were little kids until she shows up at his doorstep with a proposition: she wants him to write her biography. What begins as an odd vanity project gradually turns into a frightening glimpse into the mind of a potentially troubled girl. Fiona says that in her basement, there's a portal that leads to a magical world where a creature called the Riverman is stealing the souls of children. And Fiona's soul could be next. If Fiona really believes what she's saying, Alistair fears she may be crazy. But if it's true, her life could be at risk. In this novel from Aaron Starmer, it's up to Alistair to separate fact from fiction, fantasy from reality.

“This blend of magical realism and mystery blurs the line between reality and fantasy, setting up a creepy unease that both disturbs and propels the reader forward.” —BCCB

“Dive into this book and you may never resurface.” —Newbery Medalist Jack Gantos

“Lines between reality and fantasy blur in this powerful, disquieting tale of lost children, twisted friendship and the power of storytelling.” —Kirkus Reviews, starred review

“In this dark, twisting tale, readers are never sure if Fiona's story is true or not, and they won't want to stop reading until they find out...this magical tale is sure to please readers of urban fantasy, and with its theme of missing children and changing friendships, it will be perfect for fans of Neil Gaiman and Charles de Lint, too.” —Booklist

“Readers will find themselves confronted with deep, unanswered questions regarding the relationship of collective imaginary worlds to reality, the evolving nature of memories and friendships, and the unknowability of people. Those ready to explore darker realities will devour this book.” —School Library Journal

“Somewhere between Holly Black's Doll Bones and Nova Ren Suma's 17 & Gone in audience and tone, this blend of magical realism and mystery blurs the line between reality and fantasy, setting up a creepy unease that both disturbs and propels the reader forward...the deliciously tangled web of a plot defies categorization.” —The Bulletin of the Center For Children's Books (recommended)

“Starmer explores the relationship between creation and theft, reality and fantasy in this haunting novel...the novel's strength is in the pervasive aura of unknowing that Starmer creates and sustains.” —Publisher's Weekly

“There is a lot to ponder and recommend in this unusual tale.” —VOYA Magazine

“Starmer makes the possibilites presented by Fiona's stories feel no less improbable (or unsettling) than the scenarios Alistair construsts to explain them away, or actions he takes in an attempt to protect her.” —Publishers Weekly