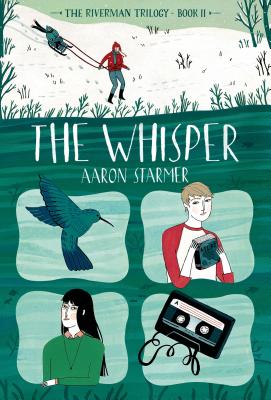 This is book number 2 in the The Riverman Trilogy series.

Twelve-year-old Alistair Cleary has washed up on shore. But where? It seems to be Aquavania, the magical realm where children create entire worlds from their imagination. There's something wrong, though. The creators have disappeared and the worlds are falling apart. All Alistair wants is to find his friend Fiona Loomis and go home. Easier said than done. Animals made of starlight, a megalomaniacal boy king, and astronauts who peddle riddles are hard enough to outwit, but they're only the beginning. To find Fiona, Alistair must travel from world to world. He must confront the mistakes of his past. And he must face countless monsters, including the soul-stealing stalker that some people call the Riverman, the merciless but misunderstood servant of Aquavania who refers to himself as the Whisper.

“* Starmer has constructed a multitude of worlds here, all tied to power of creation, and the boredom that ultimate power ultimately bestows.” —School Library Journal, STARRED REVIEW

“* In this sequel to The Riverman, 12-year-old Alistair Cleary travels to a parallel world searching for his missing friend, Fiona . . . A riveting, imaginative, disconcerting, inscrutable, unresolved sequel, guaranteed to leave readers anxious for the finale.” —Kirkus Reviews, STARRED REVIEW

“Fantasy lovers up to the challenge will devour The Whisper and crave the third book in the trilogy.” —VOYA