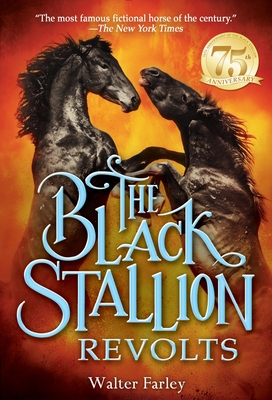 This is book number 9 in the Black Stallion series.

After the Black attacks another horse, Alec realizes that the once-wild horse needs more space and freedom, so they head out west to a huge ranch. But a terrible accident separates the two, leaving Alec with amnesia and the Black alone to reclaim the wild life to which he was born. As the Black struggles to survive, and as Alec struggles to remember who he is and his connection to the magnificent stallion in the canyon, a gripping adventure story unfolds.
Walter Farley's first book, The Black Stallion, was an instant hit when it appeared in 1941. Mr. Farley went on to write thirty-three other enormously popular books about the Black Stallion and other horses which were published in more than twenty countries. He died in 1989, shortly before the publication of his last novel, The Young Black Stallion, written with his son Steven.