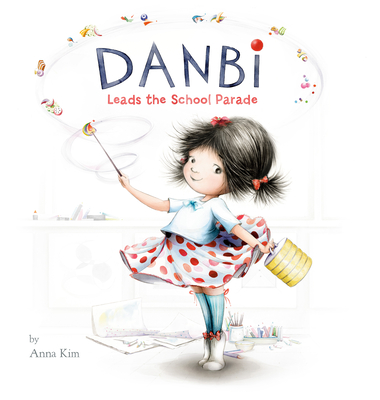 Danbi is thrilled to start her new school in America. But a bit nervous too, for when she walks into the classroom, everything goes quiet. Everyone stares. Danbi wants to join in the dances and the games, but she doesn't know the rules and just can't get anything right. Luckily, she isn't one to give up. With a spark of imagination, she makes up a new game and leads her classmates on a parade to remember! Danbi Leads the School Parade introduces readers to an irresistible new character. In this first story, she learns to navigate her two cultures and realizes that when you open your world to others, their world opens up to you.
Anna Kim immigrated to the United States from Korea when she was a child, just like Danbi. She grew up doodling around the edges of her notebooks and on any loose scraps of paper she could find. During her years of teaching music to children, she discovered that drawing stories on sticky notes worked magic for kids who couldn't sit still. Danbi Leads the School Parade is her debut. Anna lives in New York City, in a home full of sticky notes.
⭐ "Enchanting illustrations dazzle—particularly through the diverse characters’ hair and facial expressions that detail individuals’ unique traits while celebrating the entire cohort. According to the author’s note, the story is inspired by the creator’s own “bicultural identity,” and the endpapers encapsulate an immigrant child’s journey: the poignant departure and the prosaic pleasures of new friends will resonate with readers of all ages.  Imaginative, irreverent, improvisational fun in kindergarten: Danbi shares a burst of “sweet rain,” complete with a rainbow" --Kirkus Reviews (starred review)

"A sweet and helpful book for children who are nervous about moving or starting a new school—or any big change." --School Library Journal

"The expressive illustrations and the joyful onomatopoeia of the text make this an enjoyable read-aloud and especially reassuring for a child starting at a new school." --Booklist

“Charming illustrations tell the tale of a young Korean immigrant child’s first day of school, from tragedy to triumph. And what kid reading this book wouldn’t identify with Danbi when she thinks, with utter misery, “But nobody would play with me”? Did I already say it was charming? I did, but it bears repeating. Charming, charming, charming” --Betsy Bird, author and creator of the blog A Fuse #8 Production

“Funny, warmhearted, generous. Energetic and delicate at the same time. (I am) urging everyone I know to buy Danbi [Leads the School Parade]. Danbi will light up the bookshelves of any home.” --Linda Sue Park, Newbery Medal-winning author of A Single Shard