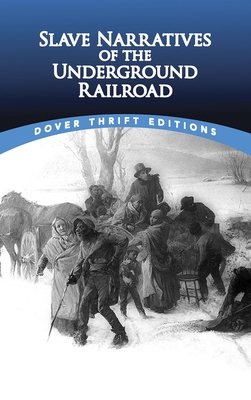 Loved this and I'm not a big history buff. This was an eye-opener. This will make you have an even deeper respect for those who went through slavery and all they endured. -- Pollard House
During the 1850s and 1860s more than 100,000 people escaped slavery in the American South by following the Underground Railroad, a complex network of secret routes and safe houses. This inexpensive compilation of firsthand accounts offers authentic insights into the Civil War era and African-American history with compelling narratives by Frederick Douglass, Harriet Tubman, Sojourner Truth, and lesser-known refugees.
Thirty selections include the story of Eliza Harris, The Slave Woman Who Crossed the Ohio River on the Drifting Ice with Her Child in Her Arms, whose experience inspired a memorable scene in Uncle Tom's Cabin. Other accounts include that of Henry Box Brown, who hid in a crate mailed to Philadelphia abolitionists; Theophilus Collins's escape after A Desperate, Bloody Struggle -- Gun, Knife and Fire Shovel, Used by Infuriated Master; excerpts from Harriet Jacobs's 1861 narrative, Incidents in the Life of a Slave Girl; and the remarkable flight of William and Ellen Craft, Female Slave in Male Attire, Fleeing as a Planter, with Her Husband as Her Body Servant.