A Companion For Owls: Being the Commonplace Book of D. Boone, Long Hunter, Back Woodsman, & c. (Paperback) 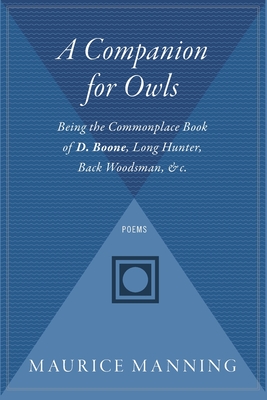 A Companion For Owls: Being the Commonplace Book of D. Boone, Long Hunter, Back Woodsman, & c. (Paperback)


Often on our shelves, but if we're out, we can usually restock quickly
This collection of highly original narrative poems is written in the voice of frontiersman Daniel Boone and captures all the beauty and struggle of nascent America. We follow the progression of Daniel Boone's life, a life led in war and in the wilderness, and see the birth of a new nation. We track the bountiful animals and the great, undisturbed rivers. We stand beside Boone as he buries his brother, then his wife, and finds comfort in his friendship with a slave named Derry.
Praised for his originality, Maurice Manning is an exciting new voice in American poetry.

The darkest place I've ever been
did not require a name. It seemed
to be a gathering place for the lint
of the world. The bottom of a hollow
beneath two ridges, sunk like a stone.
The water was surely old, the dregs
of some ancient sea, but purified
by time, like a man made better by
his years, his old hurts absorbed into
his soul, his losses like a spring
in his breast.
-from "Born Again"

MAURICE MANNING is the author of four previous books of poems. His last book, The Common Man, was a finalist for the Pulitzer Prize. A winner of the Yale Younger Poets Prize and a Guggenheim Fellowship, he teaches at Transylvania University in Lexington, Kentucky.

PRAISE FOR THE POETRY OF MAURICE MANNING