Swashby and the Sea (Hardcover) 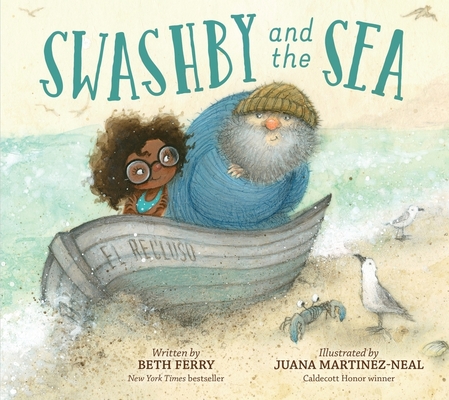 Swashby and the Sea (Hardcover)

★ "This readaloud is sweetly told as Swashby overcomes his bitter habits to welcome new, friendly, and energetic people into his quiet life." —The Bulletin of the Center for Children's Books, STARRED review

From New York Times best-selling author Beth Ferry and Caldecott Honor winner Juana Martinez-Neal comes a sweet-and-salty friendship story perfect for pirate-lovers learning new ways to communicate while at a distance. This hilarious picture book will keep emerging readers laughing, and the message-related mishaps in the story create an opportunity for spelling and sounding out new words while learning from home!

Captain Swashby loves the sea, his oldest friend. And he loves his life by the sea just as it is: salty and sandy and serene.

One day, much to Swashby’s chagrin, a young girl and her granny commandeer the empty house next door. All Swashby wants is for his new neighbors to GO AWAY and take their ruckus with them.

When Swashby begins to leave notes in the sand for his noisy neighbors, however, the beach interferes with the messages that are getting across. Could it be that the captain’s oldest friend, the sea, knows what Swashby needs even better than he knows himself?
Beth Ferry loves to wander, explore and mainly laze on the shore, but only in the summer. She is the author of several picture books, including Stick and Stone. She lives with her husband and three children by the beach in New Jersey.
Website: BethFerry.com
Twitter: @bethferry1

Juana Martinez-Neal is the Peruvian born daughter and granddaughter of painters. Her debut as an author-illustrator Alma and How She Got Her Name, was awarded a Caldecott Honor and was also published in a Spanish edition as Alma y cómo obtuvo su nombre. Her second author-illustrator book, Zonia's Rain Forest, is available in a Spanish edition La selva de Zonia. Juana has also illustrated numerous picture books including La Princesa and the Pea by Susan Middleton Elya, for which she won the Pura Belpré Illustrator Award, and Fry Bread: A Native American Family Story by Kevin Noble Maillard, which won The Robert F. Sibert Medal.
Website: juanamartinezneal.com
Instagram: @juanamartinezn
Twitter: @juanamartinez

"With charming and playful illustrations and diverse characters by Juana Martinez-Neal, and a snappy sweet narrative by Beth Ferry, this story moves our hearts and reminds us to stay open to new friends and ideas, and be present in life’s moments of adventure." —The Washington Post  ★ "The illustrator of the Caldecott Honor–winning Alma and How She Got Her Name (2018), Martinez-Neal uses acrylics, colored pencils, and graphite to create pictures that capture the feel of the seaside, as well as the protagonist’s shifting emotions. Telling a story with imagination and wit, Ferry creates a cantankerous but lovable character in Captain Swashby and a mysterious, well-intentioned, mischievous one in the sea...an exceptionally satisfying picture book." —Booklist, STARRED review   ★ "This readaloud is sweetly told as Swashby overcomes his bitter habits to welcome new, friendly, and energetic people into his quiet life....Martinez-Neal’s art captures the essence of the ocean.... Adults should prepare for a trip to the beach, as kids will want to go after hearing this." —The Bulletin of the Center for Children's Books, STARRED review   "This sweet story of friendship is sure to win over even the grumpiest of listeners." —Kirkus  "Caldecott Honoree Martinez-Neal’s acrylic, colored pencil, and graphite drawings teeter between scenes curmudgeonly and sweet, underscoring the story’s tensions. A strong sense of place emerges from the palette, redolent of sunlit sand and sea glass, and the interplay between Swashby and his meddling sea has its magic." —Publishers Weekly —