Lost Rights: The Misadventures of a Stolen American Relic (Paperback) 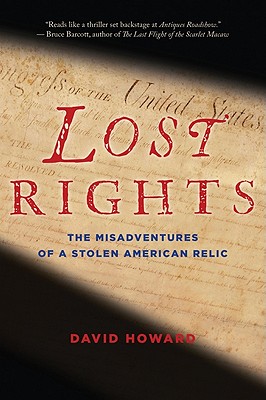 Lost Rights: The Misadventures of a Stolen American Relic (Paperback)

Near the close of the Civil War, as General Sherman blazed his path to the sea, an unknown infantryman rifled through the North Carolina state house.The soldier was hunting for simple Confederate mementos—maps, flags, official correspondence—but he wound up discovering something far more valuable. He headed home to Ohio with one of the touchstones of our republic: one of the fourteen original copies of the Bill of Rights.

Lost Rights follows that document’s singular passage over the course of 138 years, beginning with the Indiana businessman who purchased the looted parchment for five dollars, then wending its way through the exclusive and shadowy world of high-end antiquities—a world populated by obsessive archivists, oddball collectors, forgers, and thieves— and ending dramatically with the FBI sting that brought the parchment back into the hands of the government.

For fans of The Billionaire’s Vinegar and The Lost Painting, Lost Rights is “a tour de force of antiquarian sleuthing” (Hampton Sides).

DAVID HOWARD is a freelance journalist and writer whose work has appeared in the New York Times, Travel + Leisure, Backpacker, Outside, Men's Journal, and other publications. He is the executive editor of Bicycling.

“David Howard’s Lost Rights is an epic ride through American history, a colorful page-turner in which the hero is a 220-year-old piece of parchment coveted by an eccentric cast of fast-talking antiquarians and innocent patriots, nerdy record-keepers and special agents in a cinematic showdown. Howard goes deep, creating an astounding narrative weave that captures not just the strange journey of the Bill of Rights, but the modern-day country of hucksters and heroes it has wrought. A truly wonderful read!”
– Michael Paterniti, author of Driving Mr. Albert

"It would be difficult to find a more astonishing journey than the one David Howard traces in LOST RIGHTS. From a defeated and terrified Southern town at the end of the Civil War to a gleaming high rise in Philadelphia nearly 150 years later, Howard explains in riveting detail how one of our most treasured historical artifacts miraculously survived the avarice of men."
—Candice Millard, author of The River of Doubt

"In this tour de force of antiquarian sleuthing, David Howard gamely follows a circuitous trail through distant centuries and rarefied subcultures. LOST RIGHTS not only entertains and enlightens us; it challenges our rockbed assumptions about what we think we have, and what we think we know."
—Hampton Sides, author of Blood and Thunder and Ghost Soldiers

"David Howard's LOST RIGHTS reveals—and untangles—a fascinating web of secrets and lies. At the story¹s heart lies nothing less than the best intentions and the worst impulses of all humanity. With his compelling narrative, larger-than-life characters, and sharp reporting, Howard lights the darkest corners of this twisted journey of one of America's most sacred relics."
—Susan Casey, author of The Devil's Teeth

“Here's a detective story of the ages, and for the ages. Dave Howard's investigation is almost as remarkable as the story it uncovers!”
—Bill McKibben, author Eaarth: Making a Life on a Tough New Planet
—