The Boat Who Wouldn't Float (Paperback) 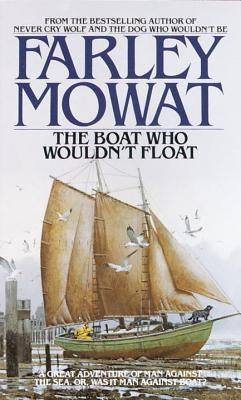 The Boat Who Wouldn't Float (Paperback)

By Farley Mowat
List Price: $7.99
Our Price: $7.19
(Save: $0.80 10%)
It seemed like a good idea. Tired of everyday life ashore, Farley Mowat would find a sturdy boat in Newfoundland and roam the salt sea over, free as a bird. What he found was the worst boat in the world, and she nearly drove him mad. The Happy Adventure, despite all that Farley and his Newfoundland helpers could do, leaked like a sieve. Her engine only worked when she felt like it. Typically, on her maiden voyage, with the engine stuck in reverse, she backed out of the harbour under full sail. And she sank, regularly.

How Farley and a varied crew, including the intrepid lady who married him, coaxed the boat from Newfoundland to Lake Ontario is a marvellous story. The encounters with sharks, rum-runners, rum and a host of unforgettable characters on land and sea make this a very funny book for readers of all ages.
Farley Mowat was born in Belleville, Ontario, in 1921, and grew up in Belleville, Trenton, Windsor, Saskatoon, Toronto, and Richmond Hill. He served in World War II from 1940 until 1945, entering the army as a private and emerging with the rank of captain. He began writing for his living in 1949 after spending two years in the Arctic. He was an inveterate traveler with a passion for remote places and peoples. He wrote 25 books, which have been published in translations in over 20 languages in more than 60 countries. They include such internationally known works as People of the Deer, The Dog Who Wouldn’t Be, Never Cry Wolf, Westviking, The Boat Who Wouldn’t Float, Sibir, A Whale for the Killing, The Snow Walker, And No Birds Sang, and Virunga: The Passion of Dian Fossey. His short stories and articles appeared in the Saturday Evening Post, Maclean’s, Atlantic Monthly, and other magazines. He died in 2014.
"Great, good humor... Very funny and often touching  tribute to a love affair that saner, duller souls  would no doubt christen Farley's Folly." --  The New York Times