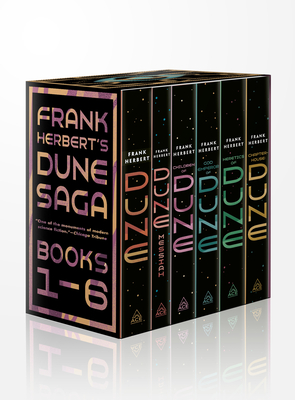 By Frank Herbert
List Price: $108.00
Our Price: $97.20
(Save: $10.80 10%)
Often on our shelves, but if we're out, we can usually restock quickly
Perfect for longtime fans and new readers alike—a beautiful trade paperback boxed set of the first six novels in Frank Herbert's Dune Saga.

In the far future, on a remote planet, an epic adventure awaits. Here are the first six novels of Frank Herbert’s magnificent Dune saga—a triumph of the imagination and one of the bestselling science fiction series of all time.

In 1952, Herbert began publishing science fiction with “Looking for Something?” in Startling Stories. But his emergence as a writer of major stature did not occur until 1965, with the publication of Dune. Dune Messiah, Children of Dune, God Emperor of Dune, Heretics of Dune, and Chapterhouse: Dune followed, completing the saga that the Chicago Tribune would call “one of the monuments of modern science fiction.” Herbert is also the author of some twenty other books, including The White Plague, The Dosadi Experiment, and Destination: Void. He died in 1986.
Praise for Dune

“I know nothing comparable to it except The Lord of the Rings.”—Arthur C. Clarke

“It is possible that Dune is even more relevant now than when it was first published.”—The New Yorker

“One of the monuments of modern science fiction.”—Chicago Tribune

“Powerful, convincing, and most ingenious.”—Robert A. Heinlein

“Herbert’s creation of this universe, with its intricate development and analysis of ecology, religion, politics and philosophy, remains one of the supreme and seminal achievements in science fiction.”—Louisville Times