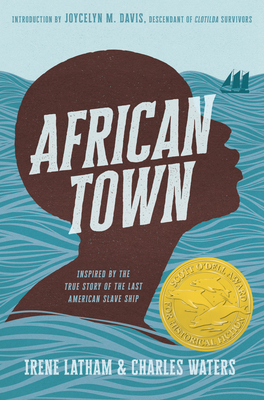 By Charles Waters, Irene Latham
List Price: $18.99
Our Price: $17.09
(Save: $1.90 10%)
Backordered
Chronicling the story of the last Africans brought illegally to America in 1860, African Town is a powerful and stunning novel-in-verse.

In 1860, long after the United States outlawed the importation of enslaved laborers, 110 men, women and children from Benin and Nigeria were captured and brought to Mobile, Alabama aboard a ship called Clotilda. Their journey includes the savage Middle Passage and being hidden in the swamplands along the Alabama River before being secretly parceled out to various plantations, where they made desperate attempts to maintain both their culture and also fit into the place of captivity to which they'd been delivered. At the end of the Civil War, the survivors created a community for themselves they called African Town, which still exists to this day. Told in 14 distinct voices, including that of the ship that brought them to the American shores and the founder of African Town, this powerfully affecting historical novel-in-verse recreates a pivotal moment in US and world history, the impacts of which we still feel today.
Irene Latham & Charles Waters are “Poetic Forever Friends” ﬁrst and collaborators second. They are the writing team behind Can I Touch Your Hair? Poems of Race, Mistakes, and Friendship, which was awarded a Charlotte Huck Honor, and Dictionary for a Better World: Poems, Quotes, and Anecdotes from A to Z, an NCTE Notable Poetry Book. They share a passion for poetry and are committed to creating  meaningful books for young readers. This is their ﬁrst novel together.
Praise for African Town:

★ “The authors have done a remarkable job of weaving the stories of the characters together and telling the story from both the perspective of the slaves and the people who orchestrated their purchase. Though this story is fictional it is based on a vast amount of research that was done on the actual people who participated in this story. . . This story will inspire readers to do some research to find out more about the real events that took place. . . Not to be missed.” —School Library Connection, starred review

★ “Inspired by the true story of the last American slave ship, African Town is an epic . . . compelling novel that doubles as an important historic document, invaluable for both classroom use and independent reading.” —Booklist, starred review

★ “African Town is a book that should be both taught and treasured.”—BookPage, starred review

★ “This gripping novel . . . [is] told from the perspectives of a myriad characters directly and indirectly involved in this event . . . where each unique voice contributes to the greater whole. Carefully executed passages appear in various forms of free verse and poetry, and each one is specific to the particular character represented. This choice makes the individual contributors not only come alive but also stand out from one another as the narrative progresses. Extensively researched and purposefully designed, this book brings together details of events from 1859 to 1901 and culminates in several pages of back matter that reinforce the entire work. VERDICT This honest, heartrending, and inspiring story is an important and necessary contribution to historical fiction collections for young adult readers.” —School Library Journal, starred review

“An ambitious verse novel told in many voices . . . The authors employ a range of poetic forms, resulting in an insightful, quickly paced telling that centers tradition and resilience.” —Publishers Weekly

“The highly personal stories in verse reveal the different aspects of this illegal trade and the impact on both the Black enslaved people and the White crew members. . . The Africans’ attempts to hold true to their home cultures and traditions—most were Yoruba—as they try to adapt to their new reality come across most powerfully. Enhanced by rich backmatter, this is a strong addition to literature about slavery.” —Kirkus Reviews

“A thoughtful portrait of how trauma informs and inhibits identity making. The end matter is a wealth of fascinating information, from the author’s note that details Waters and Lathams’ research process, to a list that elaborates on the characters’ lives, to an account of what modern day Africatown (formerly Africa Town) looks like.” —The Bulletin of the Center for Children's Books