You Can Run: A Novel (Hardcover) 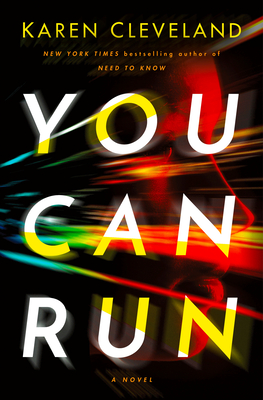 You Can Run: A Novel (Hardcover)

By Karen Cleveland
List Price: $27.00
Our Price: $24.30
(Save: $2.70 10%)
Often on our shelves, but if we're temporarily out, we can get back in!
A CIA analyst makes a split-second decision that endangers her country but saves her son—and now she must team up with an investigative journalist she’s not sure she can trust in this electrifying thriller from the New York Times bestselling author of Need to Know.

“[A] turbo-charged thriller [with] a final mind-blowing twist.”—People

It’s Jill’s job to vet new CIA sources. Like Falcon, who’s been on the recruitment fast track. But before she can get to work, Jill gets the call. Her son has been taken. And to get him back, Jill does something she thought she’d never do.

Alex Charles, a hard-hitting journalist, begins to investigate an anonymous tip: an explosive claim about the CIA’s hottest new source. This is the story that Alex has been waiting for. The tip—and a fierce determination to find the truth—leads Alex to Jill, who would rather remain hidden.

As the two begin to work together, they uncover a vast conspiracy that will force them to confront their loyalties to family and country. An edge-of-your-seat thriller, You Can Run will have you asking: What would you do to save the ones you love?
Karen Cleveland is a former CIA counterterrorism analyst and the New York Times bestselling author of Need to Know and Keep You Close. She has master’s degrees from Trinity College Dublin and Harvard University. Cleveland lives in North Carolina with her husband and three children.
“Kidnappers will kill her son if the CIA’s Jill Bailey doesn’t rubber-stamp an unvetted Syrian source. A Pulitzer-chasing journalist joins the action in this turbo-charged thriller, and the pair grapple with motherhood, ambition, and bad guys—before a final mind-blowing twist.”—People

“Two strong, resilient women working together to save the world? Yes please.”—Kirkus Reviews

“Fast-paced, tense, and downright scary . . . There’s a lot to like here: the characters are robust, the story is well constructed, the dialogue zings along, and there is that strong sense of verisimilitude that you often find when an expert writes passionately about his or her own field.”—Booklist

“Cleveland weaves technology, motherhood, and spydom’s skullduggery into a taut, alluring web. Acclaimed for fiendishly clever plotting, she whips up the story to a breakneck pace, then rewards readers with a knockout ending. Fans of Stella Rimington’s series about MI5 agent Liz Carlyle will thrill to the steely grit and brave hearts of Jill and Alex.”—Library Journal

“[Karen] Cleveland plunges the reader into a terrifying world of shifting alliances, action, and intrigue. Fans of strong, decisive female characters will find much to like.”—Publishers Weekly