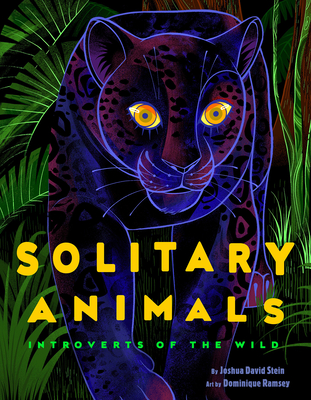 By Joshua David Stein, Dominique Ramsey (Illustrator)
List Price: $18.99
Our Price: $17.09
(Save: $1.90 10%)
Often on our shelves, but if we're out, we can usually restock quickly
Celebrate the beauty and strength of solitude with this poetic observation of the animal kingdom and those who move through it on their very own.

That silvery cloud swimming in the sea is actually a school of fish.
That splash and crash is a pod of whales, sounding.
Behold, a fever of stingrays gliding by.
But what do you call a group of octopuses?
A tangle of octopuses? A chandelier of octopuses? A multipus of octopuses?
No, octopuses prefer to be alone.
The octopus is a solitary animal.


This lyrical, nonfiction text honors animals who live in solitude, in contrast to others who live in groups. Against a backdrop of the specific names of various animal tribes (a parade of elephants, a tower of giraffes, a dazzle of zebras), Stein shines a spotlight on those animals who go through life on their own. With nature at his back, Stein invites readers to draw strength and comfort from the behaviors of fellow animals. Perfect for children who are introverted or tend to be alone, and their parents...as well as all children, who will be encouraged to respect the "natural" choices of their peers.

Joshua David Stein is a writer, editor, and podcast host in New York City. He is the editor-at-large at Fatherly and host of The Fatherly Podcast. He is the author of multiple adult books, including Food & Beer (Phaidon), Epicurean Journeys (Rizzoli), the forthcoming To Me He Was Just Dad (Artisan), as well as the co-author of Notes from a Young Black Chef (Knopf). He has also written several children's books, including Can I Eat That?; Brick, Who Found Herself in Architecture; The Ball Book (all Phaidon); and most recently The Invisible Alphabet (Rise x Penguin Workshop). He recently founded The Band Books, a band that performs children's books to music. A longtime media fixture, Stein has been the editor-in-chief of BlackBook magazine, the editor at Black Ink, a senior editor at Departures, the senior editor of Eater, and the editor-at-large at Out magazine and Tasting Table. He is currently a contributing editor at Food & Wine. Stein lives in Brooklyn with his two young sons.

Dominique Ramsey is a freelance illustrator from Atlanta, Georgia, who has a passion for telling stories about animals, nature, and the whimsical-mysteries things in life. Her inspiration comes from animation, video games, music, and children's books that have an animal focus, including the Warrior Cats book series and the Pokémon game franchise. Her inspiration also comes from animals themselves, the spiritual connection they have, their relationship with people, and what they mean to different cultures. Dominique strives for uniqueness, using bright colors, bold lines, shapes, and patterns that can excite and capture the viewer's eye. Her work focuses heavily on symbolism, where she explores themes such as mystery, culture, identity, and the subconscious mind. Her work has been acknowledged by 3x3 magazine, Society of Illustrators, and Creative Quarterly. She received her BFA in illustration from the Savannah College of Art and Design in 2020.
"An eye-catching affirmation of singular over plural." --Publishers Weekly (STARRED REVIEW)