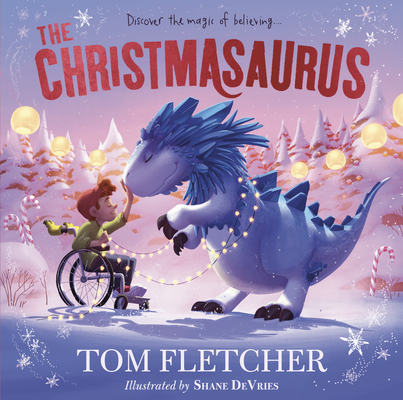 The Christmasaurus is a dinosaur who lives with Santa Claus and his elves at the North Pole. More than anything, he wants to fly with Santa's reindeer on Christmas Eve! But no matter how hard he tries, he can't seem to figure out how to fly. . . .

Until one Christmas Eve, when he meets a young boy in a wheelchair who has a wonderful idea. What if all the Christmasaurus needs is someone to believe in him? With playful, rhyming text, international bestselling author Tom Fletcher adapts part of his novel into a heartwarming picture book about friendship and the power of believing that is sure to become a new Christmas classic.
TOM FLETCHER is one of the UK’s bestselling authors for children. The Christmasaurus was the biggest debut middle grade novel of 2016, and The Creakers was a number one bestseller. Tom also writes the
incredibly successful Who’s in Your Book? picture-book series, and he is one-half of the author duo behind the Dinosaur That Pooped picture-book series, too. Tom’s books have been translated into thirty-five languages, and to date he has sold over five million copies of his books around the world. The Christmasaurus is being developed by The Greatest Showman director Michael Gracey into an animated, feature-length movie with original songs written by Tom.

SHANE DEVRIES is an illustrator born in Adelaide, Australia. He began working as an architectural illustrator and now creates visual development art for animation productions and illustrates books.
“Tom Fletcher is a creative and magical storyteller who is guaranteed to make readers laugh!” --James Patterson


"A sweet holiday story that would work well as a family read-aloud." --Booklist online