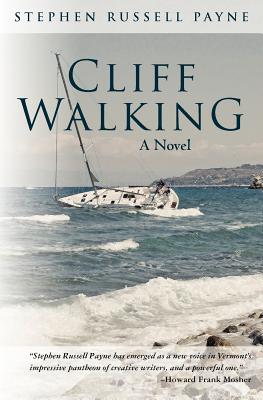 
Often on our shelves, but if we're out, we can usually restock quickly
Set on the rocky and at times unforgiving coast of Maine, Stephen Russell Payne's emotionally powerful debut novel, Cliff Walking, shares a poignant tale of loss and love that weaves together the lives of three desperate people who struggle mightily to find a way to save each other. Kate Johnson is a recovering addict from California, married to a cunning, cruel man named Leland Johnson. When she gathers the strength to escape her hellish life, she leaves with her bright, artistic twelve-year-old son, Stringer, crossing Canada as stowaways on a freight train. They eventually find their way to Winter's Cove, a provincial town on the coast of Maine. Francis Monroe is a famous Maine seascape artist whose wife died windsurfing on the bay in front of their bungalow the year before, after losing her battle with breast cancer. Emotionally paralyzed since her death, Francis has been haunted both by her loss and his subsequent inability to paint. When Stringer appears at Francis's bungalow, the meeting triggers events that dramatically alter the course of their lives. Thrust into a life-threatening altercation, Stringer is forced to take action, and ends up facing felony charges. As Stringer and his loved ones do battle with the local sheriff and the politically aspiring state's attorney, the citizens of Winter's Cove have to navigate their own deep-seated prejudices, their beliefs about family and community, and the painful necessity to reexamine justice in their town. An intimate, probing novel that mines the healing power of hope that can grow out of shared desperation, Cliff Walking is a captivating love story that carries readers on an intense, thought-provoking journey. Both fast-paced and complex, this novel is nearly impossible to put down.
Stephen Russell Payne is a fourth-generation Vermonter. A lifelong writer, he has published fiction, nonfiction, and poetry in publications including Vermont Life magazine, The Tufts Review, The Vermont Literary Review, Livin' the Vermont Way magazine, and Route 7-Vermont Literary Journal. Payne studied pre-med and English at Tufts University, receiving his master's in English before entering medical school at the University of Vermont. Since 1988 he has practiced general surgery in northern Vermont and taught at UVM as a clinical assistant professor of surgery. Over the years, he has been mentored by poets X. J. Kennedy, Galway Kinnell, and Denise Levertov, as well as by novelists Howard Frank Mosher, Jennifer Finney Boylan, and Chris Bohjalian. Much of the inspiration for Cliff Walking came from Payne's experiences helping victims of spousal and child abuse both as a physician and, previously, as a police officer. Payne lives on a northern Vermont farm with his family where their land is managed by a local organic farmer. Payne loves cutting his own firewood and spends much of his free time in the woods, where he often comes up with and develops story ideas. He and his family spend as much time as possible on Lake Champlain where they are avid Hobie Cat sailors and strong supporters of both the Lake Champlain Land Trust and the Vermont Land Trust.