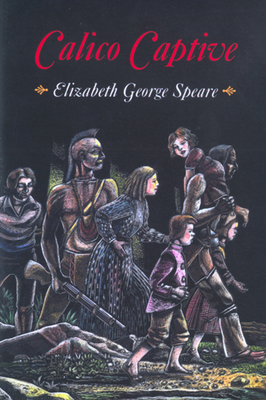 In the year 1754, the stillness of Charlestown, New Hampshire, is shattered by the terrifying cries of an Indian raid. Young Miriam Willard, on a day that had promised new happiness, finds herself instead a captive on a forest trail, caught up in the ebb and flow of the French and Indian War.
It is a harrowing march north. Miriam can only force herself to the next stopping place, the next small portion of food, the next icy stream to be crossed. At the end of the trail waits a life of hard work and, perhaps, even a life of slavery. Mingled with her thoughts of Phineas Whitney, her sweetheart on his way to Harvard, is the crying of her sister’s baby, Captive, born on the trail.
Miriam and her companions finally reach Montreal, a city of shifting loyalties filled with the intrigue of war, and here, by a sudden twist of fortune, Miriam meets the prominent Du Quesne family, who introduce her to a life she has never imagined. Based on an actual narrative diary published in 1807, Calico Captive skillfully reenacts an absorbing facet of history.

"I was born in Melrose, Massachusetts, on November 21, 1908. I have lived all my life in New England, and though I love to travel I can't imagine ever calling any other place on earth home. Since I can't remember a time when I didn't intend to write, it is hard to explain why I took so long getting around to it in earnest. But the years seemed to go by very quickly. In 1936 I married Alden Speare and came to Connecticut. Not till both children were in junior high did I find time at last to sit down quietly with a pencil and paper. I turned naturally to the things which had filled my days and thoughts and began to write magazine articles about family living. Then one day I stumbled on a true story from New England history with a character who seemed to me an ideal heroine. Though I had my first historical novel almost by accident it soon proved to be an absorbing hobby." Elizabeth George Speare (1908-1994) won the 1959 Newbery Medal for THE WITCH OF BLACKBIRD POND, and the 1962 Newbery Medal for THE BRONZE BOW. She also received a Newbery Honor Award in 1983, and in 1989 she was presented with the Laura Ingalls Wilder Award for her substantial and enduring contribution to children’s literature.