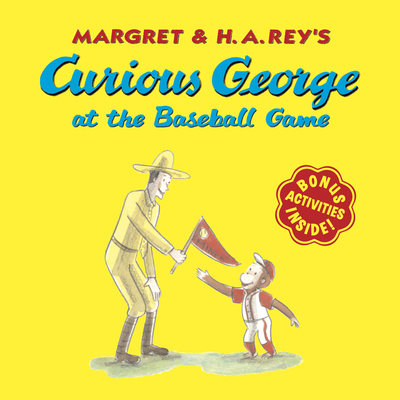 By H. A. Rey, Anna Grossnickle Hines (Illustrator)
List Price: $4.99
Our Price: $4.49
(Save: $0.50 10%)
Often on our shelves, but if we're out, we can usually restock quickly
Play ball! George is going to watch a baseball game. One curious little monkey in one big stadium makes for one exciting day at the ballpark!

George is excited to cheer on the Mudville Miners at a very special baseball game, but it isn't long before this curious little monkey goes off to investigate the lively stadium. The colorful fans and concession stands are exciting, but there's nothing quite like helping a friend in need.

Margret and H. A. Rey created many books during their lives together, including Curious George, one of the most treasured classics of all time, as well as other favorites like Pretzel, Spotty, and Find the Constellations. They had many pets—including two marmoset monkeys that joined them on one of their steamship journeys across the Atlantic. Committed philanthropists in their own lives, a portion of proceeds from each Curious George book sold flows to the Curious George Foundation, which funds programs for children that encourage inquisitiveness in learning and exploring. Curious George has been successfully adapted into a major motion picture and an Emmy-winning television show on PBS and “Pretzel and the Puppies,” based on their picture books, is a streaming series on Apple TV+. www.curiousgeorge.com www.pretzelandthepuppies.com