Citizens: A Chronicle of the French Revolution (Paperback) 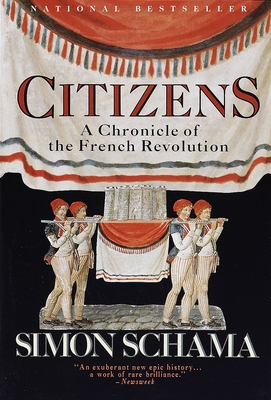 Citizens: A Chronicle of the French Revolution (Paperback)

By Simon Schama
List Price: $35.00
Our Price: $31.50
(Save: $3.50 10%)
Backordered
In this New York Times bestseller, award-winning author Simon Schama presents an ebullient country, vital and inventive, infatuated with novelty and technology--a strikingly fresh view of Louis XVI's France. One of the great landmarks of modern history publishing, Citizens: A Chronicle of the French Revolution is the most authoritative social, cultural, and narrative history of the French Revolution ever produced.
Simon Schama is University Professor of Art History and History at Columbia University and the prize-winning author of seventeen books, including The Embarrassment of Riches, Citizens, Landscape and Memory, Rembrandt's Eyes, the History of Britain trilogy and The Story of the Jews. He is a contributing editor of the Financial Times and his award-winning television work as writer and presenter for the BBC includes the fifteen-part A History of Britain and the eight-part, Emmy-winning Power of Art.
"Dazzling...stimulating...This is no ordinary book...Schama does not merely write brilliantly about people, about events, about the abuse of rhetoric, and about festivals and executions. He also chronicle with a dramatic burst of poetic imagination.... The virtues of this book [lie] in the coruscating brilliance of dazzling display of erudition and intelligence ... His chronicle is, after all, a stunningly virtuoso performance." -- Lawrence Stone, The New Republic

"Monumental...a delight to read...Lively descriptions of major events, colorful cameos of leading characters (and obscure ones too), bring them to life here as no other general work has done....Above all, Mr. Schama tells a story, and he tells it well." -- The New York Times Book Review

"Citizens, like the great 19th-century narratives it emulates, makes entertainment and erudition work hand in hand....As no other recent historian of the revolution, Schama brings to life the excitement -- and harrowing terror -- of an epochal human event." -- Newsweek

"We are in the hands of a master storyteller...Vivid, dramatic, thought-provoking...Schama's portrait of the revolution is often surprising...His splendid recounting convinces us that much of what we thought we knew is wrong." -- Time