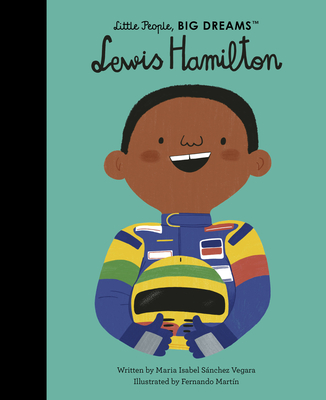 This is book number 97 in the Little People, BIG DREAMS series.

Little Lewis's childhood was filled with cars, motorcycles and watching Formula One with his dad. On his fifth birthday, he received a remote-controlled racing car and joined a local club. It was hard being the only black child there, but he listened to his dad's words: 'Let your results speak for you.' His hobby led him to go-kart racing, and at the age of 10 he became the youngest ever winner of the British cadet go-karting competition. Shortly after, he began training as a racing driving with McLaren, rising through the ranks to compete at Formula One's Grand Prix.

Despite his amazing successes, from breaking the record for the most triumphs in Formula One to his knighthood, Lewis has never forgotten where he came from. Today he is a campaigner for racial justice and racial diversity in sport, as well as an advocate for positive mental health as well as environmental issues.

This inspiring book features stylish and quirky illustrations and extra facts at the back, including a biographical timeline with historical photos and a detailed profile of the incredible young poet and activist’s life so far.

Little People, BIG DREAMS is a bestselling series of books and educational games that explore the lives of outstanding people, from designers and artists to scientists and activists. All of them achieved incredible things, yet each began life as a child with a dream.

This empowering series offers inspiring messages to children of all ages, in a range of formats. The board books are told in simple sentences, perfect for reading aloud to babies and toddlers. The hardback versions present expanded stories for beginning readers. Boxed gift sets allow you to collect a selection of the books by theme. Paper dolls, learning cards, matching games and other fun learning tools provide even more ways to make the lives of these role models accessible to children.

Inspire the next generation of outstanding people who will change the world with Little People, BIG DREAMS!

Maria Isabel Sánchez Vegara, born in Barcelona, Spain, is a writer and creative director in constant search of new concepts for children’s books and the author of the multimillion-copy best-selling Little People, BIG DREAMS series of picture books that explore the lives of outstanding people. Working for more than fifteen years for clients in top advertising agencies, her books combine creativity with learning, aiming to establish a new and fresh relationship between children and pop culture. ​

Fernando Martín is a freelance illustrator from Valencia, Spain. He graduated in Media and Audio-visial Communication, but drawing is what he enjoys the most. He works mainly with digital illustration, using limited yet colorful palettes. His illustrations are inspired by childhood memories, traveling experiences, 80’s cartoons and music.