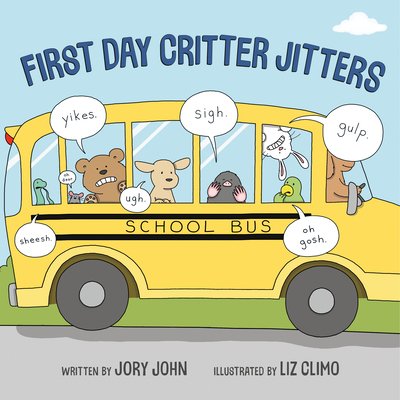 By Jory John, Liz Climo (Illustrator)
List Price: $17.99
Our Price: $16.19
(Save: $1.80 10%)
Often on our shelves, but if we're out, we can usually restock quickly
First-day-of-school jitters have never been funnier or more reassuring than in this picture book by the New York Times bestselling author Jory John and critically acclaimed illustrator Liz Climo

It's almost the first day of school, and the animals are nervous. Sloth worries about getting there on time, snake can't seem to get his backpack fastened onto his body, and bunny is afraid she'll want to hop around instead of sitting still. When they all arrive at their classroom, though, they're in for a surprise: Somebody else is nervous too. It's their teacher, the armadillo! He has rolled in as a ball, and it takes him a while to relax and unfurl. But by the next day, the animals have all figured out how to help one another through their jitters. School isn't so scary after all.
Jory John is the author of multiple books for children and adults, including the New York Times best sellers The Terrible Two and The Bad Seed, as well as the popular Penguin Problems and E. B. White Read-Aloud Honor book Goodnight Already. He lives in Oregon with his wife.

Liz Climo is an author, illustrator, and animator currently working on The Simpsons. She has written and illustrated several children's books, including the Rory the Dinosaur series, and two comic collections based on her incredibly popular Tumblr, Hi I'm Liz. She lives in Los Angeles with her family.
"[A] spry animal tale, commingling comedy and counsel while showcasing a passel of creatures braving the first day of school. Wryly and endearingly depicted in text and simplified art . . . Delivered in hand-lettered speech balloons, the animals’ pithy reactions reflect each species’ proclivities while deftly zeroing in on common childhood anxieties." —Publishers Weekly