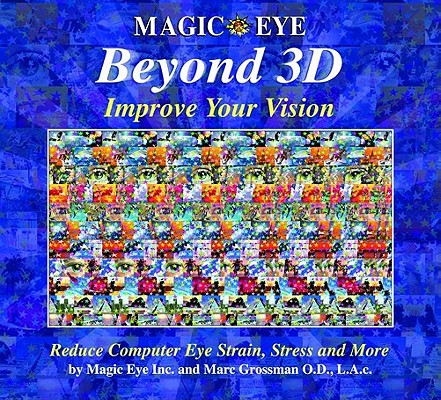 By Magic Eye Inc., Marc Grossman
List Price: $16.99
Our Price: $15.29
(Save: $1.70 10%)
Train your eyes and your mind with this visionary, imaginative collection of Magic Eye illustrations that entertains you even as it can help improve your vision at the same time.

"I have seen incredible changes in people's overall behavior by viewing Magic Eye images, including vision improvement. This book discusses some of the types of behavioral changes that my patients have reported as well as what possible physiological and psychological mechanisms may account for these changes."—Dr. Marc Grossman

When Magic Eye images hit the publishing world in the 1990s, the response was as magical as the 3D images popping from their colorful backgrounds. Viewers couldn't get these best-selling books fast enough. In fact, Magic Eye I, II, and III rode the New York Times best-seller list for 34 weeks and eventually sold more than 20 million copies. Now Beyond 3D: Improve Your Vision with Magic Eye takes this phenomenon to another level.

Beyond 3D examines the medical benefits and scientific possibilities related to viewing these remarkable images. Clearly explained in lay terms and through the use of numerous Magic Eye illustrations, the book not only helps readers "see" the images, it identifies and demonstrates the many physical and performance-related enrichments that may result, including:

Magic Eye(r) ignited the worldwide 3D craze of the 1990s. In fact, Magic Eye I, II, and III appeared on the "New York Times" best-seller list for a combined 73 weeks. More than 20 million copies of Magic Eye books have been sold in more than 25 languages. The weekly newspaper syndicated comic strip has appeared in newspapers around the world since 1994 and became the fastest start-up syndication in the history of Universal Press Syndicate.

Magic Eye Inc. first captured consumer and commercial attention when it came into international focus in the 1990s. Since then, the creators developed the sale of more than 20 million copies worldwide in more than 25 languages. In 2001, Magic Eye released four new books, including a best-seller in Japan. The company has cross-licensed with the Walt Disney Company, Warner Bros., and Marvel Comics, along with many others, and retail clients have ranged from the National Institutes of Health to the Grateful Dead. Marc Grossman, O.D., L.A.c., uses Magic Eye images in his daily practice. A well-known speaker on vision-related topics, Marc co-created "Magic Eye: How to See 3D" in 1996, and is the author of "Natural Eye Care: An Encyclopedia";" Greater Vision: A Comprehensive Program for Physical, Emotional, and Spiritual Clarity"; and "Natural Eye Care: A Comprehensive Manual for Practitioners of Oriental Medicine."