Your Personal Penguin (Boynton on Board) (Board book) 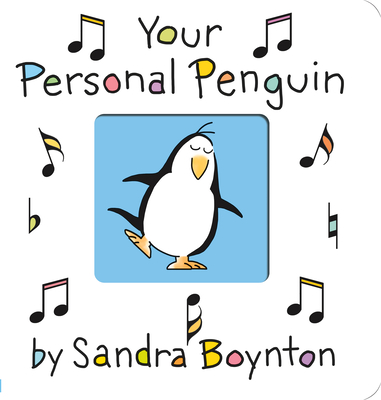 Your Personal Penguin (Boynton on Board) (Board book)

By Sandra Boynton
List Price: $7.95
Our Price: $7.16
(Save: $0.80 10%)
Often on our shelves, but if we're out, we can usually restock quickly
I want to be your PERSONAL PENGUIN from now on!
Your Personal Penguin is an irrepressible, read-aloud, listen-along favorite for young children and the grown-ups who read to them. Fun to hold, the book tells the story of a slightly bewildered hippo and the loyal penguin who wants nothing more than to be his pal:

Now, lots of other penguins seem to be fine
in a universe of nothing but ice.
But if I could be yours, and you could be mine,
Our cozy little world would be twice as nice.
I want to be Your Personal Penguin.

The original song "Your Personal Penguin," sung by Davy Jones of The Monkees, is available for download.
Sandra Boynton is a popular American cartoonist, children's author, songwriter, producer, and director. Since 1974, Boynton has written and illustrated over sixty children's books and seven general audience books, including five New York Times bestsellers. More than 70 million of her books have been sold, "mostly to friends and family," she says. She has also written (with Michael Ford) and produced six albums of renegade children's music. Three of her albums have been certified Gold (over 500,000 copies sold), and Philadelphia Chickens, nominated for a Grammy, has gone Platinum (over 1 million copies sold). Boynton has also directed twelve music videos of her songs, including the award-winning "One Shoe Blues" starring B.B. King, "Alligator Stroll" starring Josh Turner, and "Tyrannosaurus Funk" (animation) sung by Samuel L. Jackson. She lives in rural New England, and her studio is in a barn with perhaps the only hippopotamus weathervane in America.