Stories of the Saints: Bold and Inspiring Tales of Adventure, Grace, and Courage (Hardcover) 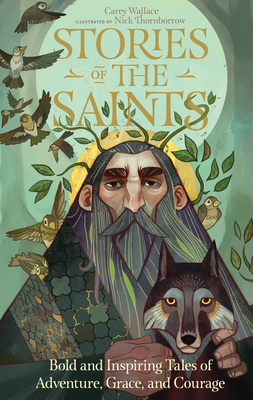 Stories of the Saints: Bold and Inspiring Tales of Adventure, Grace, and Courage (Hardcover)

By Carey Wallace, Nick Thornborrow (Illustrator)
List Price: $26.95
Our Price: $24.26
(Save: $2.70 10%)
Often on our shelves, but if we're out, we can usually restock quickly
Performing Miracles. Facing Wild Lions. Confronting Demons. Transforming the World.

From Augustine to Mother Teresa, officially canonized as St. Teresa of Calcutta, discover seventy of the best-known and best-loved saints and read their riveting stories.
Meet Joan of Arc, whose transcendent faith compelled her to lead an army when the king’s courage failed. Francis of Assisi, whose gentleness tamed a man-eating wolf. Valentine, a bishop in the time of ancient Rome, who spoke so often of Christ’s love that his saint’s day, February 12, has been associated with courtly love since the Middle Ages. St. Thomas Aquinas, the great teacher. Peter Claver, who cared for hundreds of thousands of people on slave ships after their voyage as captives. And Bernadette, whose vision of Mary instructed her to dig the spring that became the healing waters of Lourdes.

Each saint is illustrated in a dramatic and stylized full-color portrait, and included in every entry are the saint’s dates, location, emblems, feast days, and patronage. Taken together, these stories create a rich, inspiring, and entertaining history of faith and courage. For kids age 10 and up.

A perfect gift for Confirmation.

Carey Wallace was raised in a small town in Michigan. She is the author of The Blind Contessa's New Machine, The Ghost in the Glass House, and Choose. She lives and works in Brooklyn, NY.

Illustrator Nick Thornborrow is a concept and storyboard artist for BioWare, a developer of video games for PC, console, and online role-playing. He lives and works in Edmonton, Alberta, Canada.
"Unlike other children’s books about the saints that can be heavy-handed in imparting spiritual lessons, Wallace’s work relies on the stories themselves to leave their own impressions. They incorporate both legend and historical facts."
—Catholic Review

"The saints included span centuries and cultures, including well-known figures… more obscure ones like Mary of Egypt and John Nepomucene, and those from non-Western cultures... Wallace presents them all with quiet confidence that the stories matter, and she convinces us that they do. Thornborrow's illustrations combine traditional iconography with modern graphic art, effectively dramatizing each tale. Unusual, well-done."
—Kirkus Reviews

"Wallace’s prose is evocative and reverent. She opens with 2nd-century CE Polycarp, bishop of Smyrna, and weaves chronologically to end with Teresa of Calcutta (Mother Teresa). Each biographical sketch begins with the date, location where the saint lived or is known, emblem, patronage, and feast day, culminating in legends about the saints amplified by Thornborrow’s luminous ink illustrations... Wallace’s accounts of the lives of saints will appeal any Christian, particularly those who read graphic novels."
—Publishers Weekly

"An accessible and dynamic compendium... the emphasis here is on humanity and faithful deeds, not grisly martyrdom."
—The Wall Street Journal

Named by Quill  Quire as one of the best book covers of 2020.