What-the-Dickens: The Story of a Rogue Tooth Fairy (Paperback) 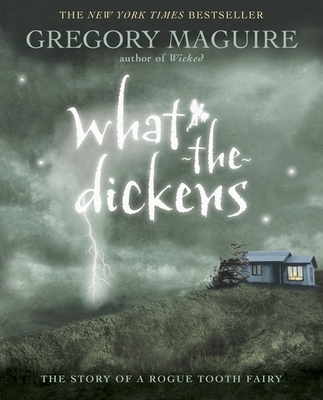 What-the-Dickens: The Story of a Rogue Tooth Fairy (Paperback)


Often on our shelves, but if we're out, we can usually restock quickly
A New York Times Bestseller! From the best-selling author of Wicked, a transporting tale-within-a-tale about the strange world of skibbereen — aka tooth fairies — and the universal need to believe.

A terrible storm is raging, and ten-year-old Dinah is huddled by candlelight with her brother, sister, and cousin Gage, who is telling a very unusual tale. It’s the story of What-the-Dickens, a newly hatched orphan creature who finds he has an attraction to teeth, a crush on a cat named McCavity, and a penchant for getting into trouble. One day he happens upon a feisty girl skibberee who is working as an Agent of Change — trading coins for teeth — and learns that there is a dutiful tribe of skibbereen (call them tooth fairies) to which he hopes to belong. As his tale of discovery unfolds, however, both What-the- Dickens and Dinah come to see that the world is both richer and less sure than they ever imagined.
Gregory Maguire is the author of the incredibly popular books in the Wicked Years series, including Wicked: The Life and Times of the Wicked Witch of the West, which inspired the musical. He is also the author of several books for children, including What-the-Dickens, a New York Times bestseller. Gregory Maguire lives outside Boston.
~TWILIGHT~

BY EVENING, WHEN THE WINDS ROSE yet again, the power began to stutter at half-strength, and the sirens to fail. From those streetlights whose bulbs hadn’t been stoned, a tea-colored dusk settled in uncertain tides. It fell on the dirty militias of pack dogs, all bullying and foaming against one another, and on the palm fronds twitching in the storm gutter, and on the abandoned cars, and everything — everything — was flattened, equalized in the gloom of half-light. Like the subjects in a browning photograph in some antique photo album, only these times weren’t antique. They
were now.

The air seemed both oily and dry. If you rubbed your fingers together, a miser imagining a coin, your fingers stuck slightly.

A fug of smoke lay on the slopes above the deserted freeway. It might have reminded neighbors of campfire hours, but there were few neighbors around to notice. Most of them had gotten out while they still could.

Dinah could feel that everything was different, without knowing how or why. She wasn’t old enough to add up this column of facts:
- power cuts
- the smell of wet earth: mudslide surgically opening the hills
- winds like Joshua’s army battering the walls of Jericho
- massed clouds with poisonous yellow edges
- the evacuation of the downslope neighbors, and the silence
and come up with a grown-up summary, like one or more of the following:
- the collapse of local government and services
- the collapse of public confidence, too
- state of emergency
- end of the world
- business as usual, just a variety of usual not usually seen.
After all, Dinah was only ten.

Ten, and in some ways, a youngish ten, because her family
lived remotely.

For one thing, they kept themselves apart — literally. The Ormsbys sequestered themselves in a scrappy bungalow perched at the uphill end of the canyon, where the unpaved county road petered out into ridge rubble and scrub pine.

The Ormsbys weren’t rural castaways nor survivalists — nothing like that. They were trying the experiment of living by gospel standards, and they hoped to be surer of their faith tomorrow than they’d been yesterday.

A decent task and, around here, a lonely one. The Ormsby family made its home a citadel against the alluring nearby world of the Internet, the malls, the cable networks, and other such temptations.

The Ormsby parents called these attractions slick. They sighed and worried: dangerous. They feared cunning snares and delusions. Dinah Ormsby wished she could study such matters close-up and decide for herself.

Dinah and her big brother, Zeke, were homeschooled. This, they were frequently reminded, kept them safe, made them strong, and preserved their goodness. Since most of the time they felt safe, strong, and good, they assumed the strategy was working.

But all kids possess a nervy ability to dismay their parents, and the kids of the Ormsby family were no exception. Dinah saw life as a series of miracles with a fervor that even her devout parents considered unseemly.

"No, Santa Claus has no website staffed by underground Nordic trolls. No, there is no flight school for the training of apprentice reindeer. No to Santa Claus, period," her mother always said. "Dinah, honey, don’t let your imagination run away with you." Exasperatedly: "Govern yourself!"

"Think things through," said her dad, ever the peacemaker. "Big heart, big faith: great. But make sure you have a big mind, too. Use the brain God gave you."

Dinah took no offense, and she did try to think things through. From the Ormsby’s bunker, high above the threat of contamination by modern life, she could still love the world. In a hundred ways, a new way every day. Even a crisis could prove thrilling as it unfolded:
- Where, for instance, had her secret downslope friends gone? Just imagining their adventures on the road — with their normal, middle-class
families — made Dinah happy. Or curious, anyway.
- For another instance: Just now, around the corner of the house, here comes the newcomer, Gage. A distant cousin of Dinah’s mom. A few
days ago he had arrived on the bus for a rare visit and, presto. When the problems began to multiply and the result was a disaster, Gage had
been right there, ready to help out as an emergency babysitter. Talk about timely — it was downright providential. How could you deny it?

Therefore, Dinah concluded,
- A storm is as good a setting for a miracle as any.

Of course, it would have been a little more miraculous if Gage had proven to be handy in a disaster, but Dinah wasn’t inclined to second-guess the hand of God. She would take any blessing that came along. Even if decent cousin Gage was a bit — she tried to face it, to use her good mind with honesty — ineffectual.

Hopeless at fixing anything. Clumsy with a screwdriver. Skittish with a used diaper. ("As a weather forecaster," Zeke mumbled to Dinah, "Gage is all wet: where is the clear sky, the sunlight he’s been promising?")

Yes, Gage Tavenner was a tangle of recklessly minor talents. Who needed a mandolin player when the electric power wouldn’t come on anymore?

But he was all they had, now. An adequate miracle so far.

"Zeke," Gage called, "get down from that shed roof ! Are you insane? We want another medical crisis?"

"And fry yourself in the process? Power is out all over the county. Up there, if the winds get much stronger, you’ll be flown to your next destination without the benefit of an airplane. Down. Now. . . . "