The Path of Daggers: Book Eight of 'The Wheel of Time' (Paperback) 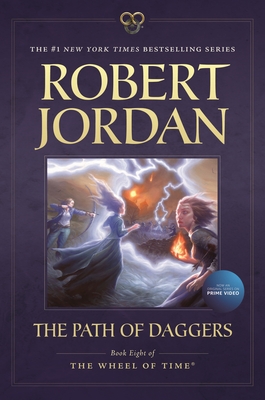 The Path of Daggers: Book Eight of 'The Wheel of Time' (Paperback)

This is book number 8 in the Wheel of Time series.

In The Path of Daggers, the eighth novel in Robert Jordan’s #1 New York Times bestselling epic fantasy series, The Wheel of Time®, Rand al'Thor engages in battle wearing the Crown of Swords and wielding Callandor against a force unprepared for the wrath of the Dragon Reborn.

The Seanchan invaders are heading for Illian—and Rand's army of Asha'man soldiers. When they meet in battle, some of the Asha'man are afflicted by madness, unable to control their channeling and unleashing raw power.

The madness extends to Rand himself. He has been hearing the voice of a man believed to have been the previous Dragon Reborn. Besieged by visions and debilitated whenever he uses the One Power, Rand chooses to attack the Seanchan with Callandor. The sword consumes him with a berserker rage, felling ally and enemy alike. And when he regains his senses, Rand finds himself less trusted by those who were once the most loyal.

“You can't talk about epic fantasy without acknowledging the titanic influence Robert Jordan has had on the grenre.” —Jason Denzel, author of Mystic and founder of Dragonmount.com