Lords of Waterdeep: A Dungeons & Dragons Board Game (Novelty book) 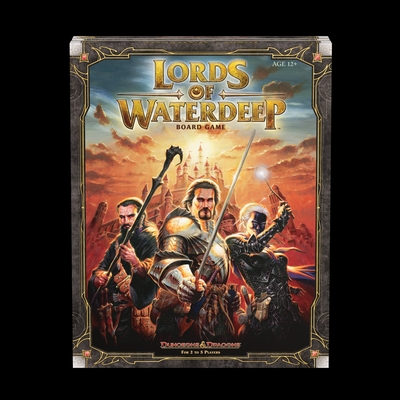 Lords of Waterdeep: A Dungeons & Dragons Board Game (Novelty book)

By Wizards RPG Team
List Price: $49.99
Our Price: $44.99
(Save: $5.00 10%)
Backordered
Waterdeep, the City of Splendors--the most resplendent jewel in the Forgotten Realms, and a den of political intrigue and shady back-alley dealings. In this game, the players are powerful lords vying for control of this great city. Its treasures and resources are ripe for the taking, and that which cannot be gained through trickery and negotiation must be taken by force!

Lords of Waterdeep is a Euro-style board game for 2-5 players.

Components:
Game board
Rulebook
5 card stock player mats
121 Intrigue, Quest, and Role cards
130 wooden cubes, pawns, and score pieces
Wooden player markers
Card stock tiles and tokens representing buildings, gold coins, and victory points
PETER LEE is a game designer at Wizards of the Coast. When not designing sets of dungeon tiles, he creates board games and other non-roleplaying games, including the Wrath of Ashardalon Board Game and The Legend of Drizzt Board Game.

RODNEY THOMPSON is an R&D tabletop games manager at Wizards of the Coast. His credits include the Dark Sun Campaign Setting, Player's Option: Heroes of the Feywild, and Monster Vault.