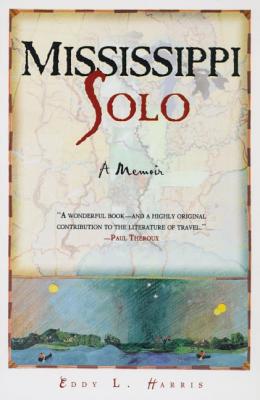 Since the publication of his first book, Mississippi Solo, Eddy L. Harris has been praised for his travel writing. In this exciting reissue of his classic travelogue, readers will come to treasure the rich insightful prose that is as textured as the Mississippi River itself. They will be taken by the hand by an adventurer whose lifelong dream is to canoe the length of this mighty river, from Minnesota to New Orleans. The trip's dangers were legion for a Black man traveling alone, paddling from "where there ain't no black folks to where they still don't like us much." Barge waives loom large, wild dogs roam the wooded shores, and, in the Arkansas dusk, two shotgun-toting bigots nearly bring the author's dream to a bloody . Sustaining him through the hard weeks of paddling were the hundreds of people who reached out to share a small piece of his challenge. Mississippi Solo is a big, rollicking, brilliant book, a wonderful piece of American adventure, and an unforgettable story of a man testing his own limits.

Eddy L. Harris is the author of three critically acclaimed books, Native Stranger, South of Haunted Dreams, and Still Life in Harlem, a New York Times Book Review notable book of 1997.  A graduate of Stanford University, he teaches at Washington University in Missouri.

“A wonderful book--and a highly original contribution to the literature of travel.” —Paul Theroux"

“In his mastery of language, glinting irony, poetic prose, and uncanny powers of observation, Eddy L. Harris is the equal of Paul Theroux and Bruce Chatwin.” —Publishers Weekly