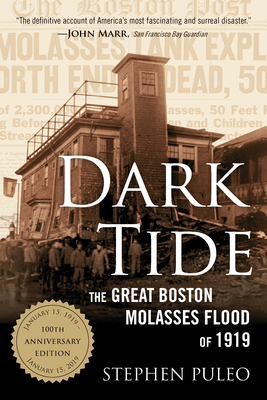 By Stephen Puleo
List Price: $17.00
Our Price: $15.30
(Save: $1.70 10%)
Often on our shelves, but if we're out, we can usually restock quickly
A new 100th anniversary edition of the only adult book on one of the odder disasters in US history—and the greed, disregard for poor immigrants, and lack of safety standards that led to it.

Around noon on January 15, 1919, a group of firefighters were playing cards in Boston’s North End when they heard a tremendous crash. It was like roaring surf, one of them said later. Like a runaway two-horse team smashing through a fence, said another. A third firefighter jumped up from his chair to look out a window—“Oh my God!” he shouted to the other men, “Run!” A 50-foot-tall steel tank filled with 2.3 million gallons of molasses had just collapsed on Boston’s waterfront, disgorging its contents as a 15-foot-high wave of molasses that at its outset traveled at 35 miles an hour. It demolished wooden homes, even the brick fire station. The number of dead wasn’t known for days. It would be years before a landmark court battle determined who was responsible for the disaster.
Stephen Puleo is the author of several books including the Boston Globe bestseller The Boston Italians and the critically acclaimed Boston-area bestseller Dark Tide: The Great Boston Molasses Flood of 1919. A former award-winning newspaper reporter and contributor to American History magazine, he holds a master’s degree in history and teaches at Suffolk University. He and his wife, Kate, live in the Boston area. Find him online at www.stephenpuleo.com.
Narrated with gusto . . . [Puleo's] enthusiasm for a little-known catastrophe is infectious. —The New Yorker

"Thoroughly researched . . . weaves together the stories of the people and families affected by the disaster, with often heartbreaking glimpses of their fates . . . The cleanup lasted months, the lawsuits years, the fearful memories a lifetime." —Randolph E. Schmid, Associated Press

"Giving a human face to tragedy is part of the brilliance of Stephen Puleo's Dark Tide . . . Until they were given voice in this book, the characters who drove the story were forgotten." —Caroline Leavitt, Boston Sunday Globe