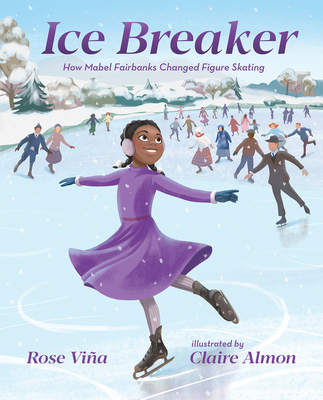 By Rose Viña, Claire Almon (Illustrator)
List Price: $16.99
Our Price: $15.29
(Save: $1.70 10%)
Backordered
In the 1930s, only white figure skaters were allowed in public ice rinks and to compete for gold medals, but Mabel Fairbanks wouldn’t let that stop her. With skates two sizes too big and a heart full of dreams, Mabel beat the odds and broke down color barriers through sheer determination and athletic skill. Mabel became the first African-American woman to be inducted into the U.S. Figure Skating Hall of Fame.
Rose Viña is a Cuban-American writer originally from California. Rose was a competitive figure skater for more than 20 years and now serves as the head figure skating coach in Sweden. Claire Almon is an illustrator who also works in character design in animation.
"Mabel Fairbanks was born in an era when people of color weren’t allowed in many public spaces. Coming from humble beginnings, she ultimately became an influential figure in ice-skating events around the world. Viña’s text highlights Mabel’s perseverance; growing up, she was denied over and over again entering white skating places, but she persisted. At a local skating rink, the manager finally allowed her to skate once ‘the white skaters were done training.’ Later, an entertainment manager named Wally Hunter noticed Mabel’s talent and built an ice tank in her home so that she could skate anytime she wanted. The story goes on to show how, as Mabel aged, she continued to break down barriers in support of future generations. Almon’s digital illustrations have an accessibly modern look, yet the soft color palette gives a vintage vibe. Sports fans will love this inclusive and inspiring look at how one girl’s determination enabled her to live out her dreams in a challenging period of American history." — Booklist