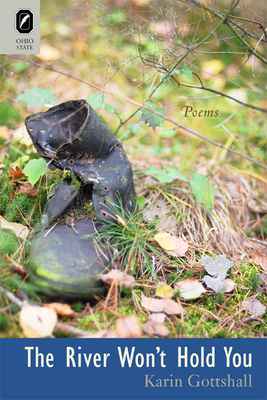 
Unfortunately, this book is not available to order through us. Please try Powells.com or Biblio.com.
Haunting and haunted, The River Won’t Hold You interrogates loneliness and loss with quiet insistence. In poems fashioned at the difficult intersection of imagination and experience, Karin Gottshall seeks an uneasy solace in the mysterious gaps between them: “I tell myself I can be content with the pleasures / permitted ghosts,” she writes in “Afterlife,” “but my body wakes up / leaking saltwater, and won’t let my ghost-self be.” Poetic structure and the music of language offer a seductive repository for memory, philosophy, and pain. These poems are generous in both their formal approaches and their palettes of sound and silences. But Gottshall never settles for an easy or artificial solution to the questions her poems ask; the beauty of her work comes, instead, from the directness of her gaze and the images that gaze fixes itself upon: “Wide-open, staring eyes of the tiger / I drew and had to destroy because it wouldn’t sleep.”


The River Won’t Hold You is Karin Gottshall’s second book. She lives in Vermont and teaches at Middlebury College.
“The River Won’t Hold You is a haunted, burning house of poems. Karin Gottshall’s voice is completely unique, but there’s a strange ancientness here, and what is left to mystery in these poems is often as important as what is explicit. Gottshall is an imagery magician, and a musician, too. Her poetry is unforgettable, significant, and lovely.” —Laura Kasischke


“In Karin Gottshall’s award-winning second collection of poems, the world is something to be understood through careful observation, but also something to be understood by. The narrators of her poems grow into consciousness by way of the senses—you can hear, smell, see, and almost touch the scenes described here. Gottshall’s poems remind me of the contortionist in her poem “Circus,” “slipping so fluidly through her own knots.” These are brilliant, musical, magical poems, a circus of delights not to be missed.” —Wyn Cooper