Irena Sendler and the Children of the Warsaw Ghetto (Paperback) 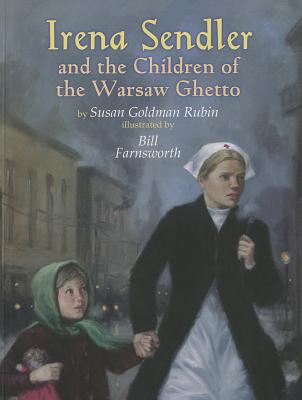 Irena Sendler and the Children of the Warsaw Ghetto (Paperback)

By Susan Goldman Rubin, Bill Farnsworth (Illustrator)
List Price: $8.99
Our Price: $8.09
(Save: $0.90 10%)
IIrena Sendler, a Polish social worker, helped nearly four hundred Jewish children out of the Warsaw Ghetto and into hiding during World War II.
Susan Goldman Rubin is the author of more than fifty-five books for children. She has written extensively on human rights in books such as Fireflies in the Dark: the Story of Friedl Dicker-Brandeis and the Children of Terezin, which was a Sydney Taylor Award Honor Book and a SCBWI Golden Kite Honor Book, and Freedom Summer: The 1964 Struggle for Civil Rights in Mississippi, which was an ALA Notable Book, a Booklist Editors' Choice and A Golden Kite Honor Book. Many of her books focus on the arts, with an emphasis on the visual arts. She lives in Malibu, California.

Bill Farnsworth’s illustrations for The Flag with Fifty-six Stars: A Gift from the Survivors of Mauthausen by Susan Goldman Rubin were called "nothing short of extraordinary" by PW in a starred review. He lives in Florida.