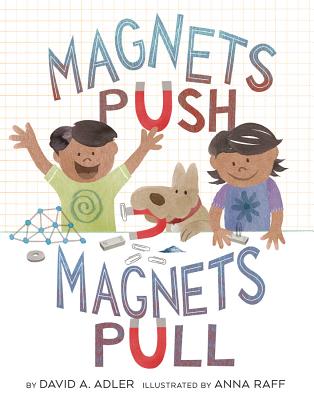 Magnetism is all around us--even the earth is a giant magnet.  A world without magnets would be a world without cell phones, computers, and more!

Trusted children's nonfiction author David A. Adler covers the basics of magnetism, including compasses, for aspiring scientists. Hands-on experiments are smartly woven into the narrative. Want to test out the strength of a magnet? All you need is a bowl of water and some paper clips!

Anna Raff's lively art illustrates scientific concepts clearly, with the added fun of two siblings and their dog exploring and learning together. Back matter includes a glossary that defines such terms as attraction, pole, electromagnetism, force, and more. Suggested activities on how to make your own magnet are also included.

Finalist for the AAAS/Subaru SB&F Prize for Excellence in Science Books
David A. Adler is a former math teacher and author of more than two hundred books for children.  He has collaborated on several science picture books with Anna Raff, including Things That Float and Things That Don't and Light Waves, a finalist for the SB&F Prize for Excellence in Science Books.  He is also the author of the Picture Book Biography series, the Cam Jansen mystery series, as well as books on math and history. He lives in New York.

Anna Raff is an award-winning illustrator of children's books. She illustrated David A. Adler's Simple Machines and Things That Float and Things That Don't, which received starred reviews from both Booklist and Publishers Weekly. She lives in New York City.
A Finalist for the SB&F Prize – Hands-On Science Book Category
A Bank Street Best Children's Book of the Year

"Presenting information with an upbeat tone and imaginative touches, the book encourages children to learn by doing. An intelligent starting point for hands-on exploration of the familiar yet mysterious phenomenon of magnetism."—Booklist

"Adler's excellent explanations of physical science for young children continue with this exploration of magnets and magnetism. The informative, interactive text encourages readers to track down materials and investigate on their own . . . Raff's illustrations of children and their mischievous dog assistant provide a friendly and helpful orientation to the activities described in the text."—Horn Book Magazine