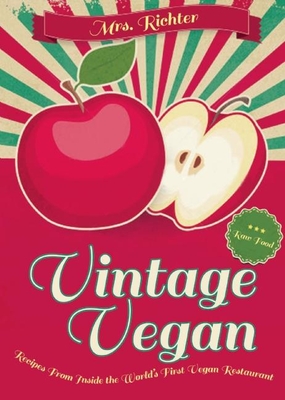 By Vera Richter
List Price: $16.95
Our Price: $15.26
(Save: $1.70 10%)
Often on our shelves, but if we're out, we can usually restock quickly
Before Hollywood goddesses like Gwyneth and Beyonc ; before Deliciously Ella and Vegan Before Six, there was Mrs Richter, the trailblazing nutritional guru who opened the world's first ever raw, vegan restaurant. Having opened its doors in 1917, the Eutropheon served up a delicious array of soups, pies and confections, enticing diners to the table throughout the 1920s. Drawing upon a wholesome array of purely plant-based ingredients, Vera Richter's recipes rely upon choppers, mixers and the glorious LA sunshine (required to dry out her homemade pies), but never the oven or the hob. One hundred percent raw, the vitamin content of her dishes was never compromised by conventional baking or frying methods. From cow-less ice-cream to egg-less mayonnaise, gluten-free tamales to homemade almond milk, Vintage Vegan collects over 100 of her most mouth-watering recipes for you to recreate at home. So, prepare to step away from the oven and back in time. Guaranteed to make you glow from the inside out - while shedding a few pounds in the process - Vintage Vegan provides a tantalizing taste of the Roaring Twenties that's sure to leave you hungry for more.

Vera Richter (1884-1960) and her husband John (1863-1949) introduced Los Angeles to America's first raw food restaurant, the Eutropheon in 1917. As John gave weekly lectures on the benefits of healthy eating and natural living, Vera adapted her restaurant's menu into one of the first raw-food 'cookbooks', Mrs Richter's Cook-Less Book, first published in 1925. Together these raw-food advocates began a movement, influencing the likes of silent film star Gloria Swanson and natural health advocate Paul Bragg, whose live food products can still be purchased today.