On the Spine of Time: A Flyfisher's Journey Among Mountain People, Streams & Trout (Pruett) (Paperback) 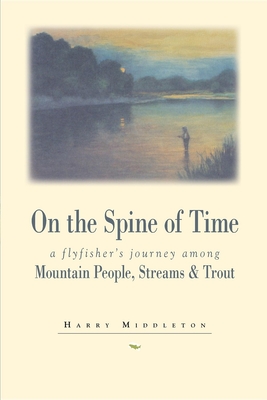 On the Spine of Time: A Flyfisher's Journey Among Mountain People, Streams & Trout (Pruett) (Paperback)

This powerful story of one angler's adventures in the Great Smoky Mountains is a descent into wildness, a meditation on the landscape bathed in greenness and truth, and the discovery of a people living -- on the spine of time.

From the solace of mountain streams to the frenetic bustle of Gatlinburg, one of Tennessee's great tourist towns, this memorable journey summons readers to confront the joys and sorrows of life through a new understanding of our place in nature and its process.

Harry Middleton had to endure hardships to find the queen mother of all trout streams in the heart of the Great Smoky Mountains of Tennessee. He had to live through treacherous mountain roads, the cloud of airborne industrial toxins that shrouds the range for most of the year, an occasional blast of lightning, and, worst of all, a helping of rancid potato salad at a roadside diner. Like Norman MacLean in A River Runs Through It, Middleton makes fly-fishing a religion with its own vision of nirvana, and if it takes an occasional descent into the nether regions to attain it, the author isn't afraid to supply the grisly details. This graceful, funny memoir belongs in every angler's library.

Harry Middleton was a writer and author of five books on fishing and the outdoor lifestyle. He wrote intensely descriptive prose using a wide- ranging vocabulary to create sparkling stories about wild places and remote trout streams. He was a critically acclaimed author whose books include "The Earth is Enough: Growing Up in a World of Flyfishing, Trout, and Old Men (1989)," On the" Spine of Time: a Flyfisher's Journey among Mountain People, Streams, & Trout (1991"), "The Bright Country: a Fisherman's Return to Trout, Wild Water and Himself (1993)" and "Rivers of Memory (1993)." He is the recipient of the Friends of American Writers Award, the Outdoor Writers Association of American Best Book Award, and the Southeastern Outdoor Press Best Book Award.

Harry was born in 1949 and grew up in the south graduating from Northwestern State University in Natchitoches, Louisiana with an English degree. He earned a master's degree in Western history from Louisiana State University in 1973. He wrote the "Outdoor South" column for "Southern Living" magazine from 1984 to 1991. He passed away unexpectedly in 1993 at the age of 43. He is survived by his widow, and two sons.